The need for urgency on the Constitutional Reform Commission Bill 2017 was highlighted by British High Commissioner to Guyana, Gregg Quinn, at a press briefing Thursday at his residence. 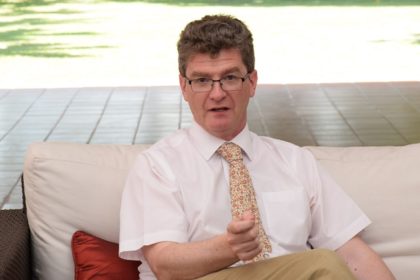 Quinn is of the opinion that the general public feels that the constitution needs to be reviewed. He noted, “There is always scope for more speed on the Constitutional Reform, given the fact that people I talk to, and that is the political, NGOs and for want of a better term the normal men and women on the streets. All of them seem to agree that there is a need for constitution reform. Where they think the reform is and what they think the reform is, is often different.”

The Constitutional Reform Consultative Commission Bill 2017 was read for the first time in the National Assembly on July, 27, 2017 along with the Broadcasting (Amendment) Bill 2017 by the First Vice President and Prime Minister, Moses Nagamootoo.

In addition to the input from stakeholders, the Commissioners have considered and evaluated the submissions from the people of Guyana and acquired the benefits resulting from public consultations.

Ambassador Quinn disclosed that he hopes to meet with the administration in September, before he goes on leave, to “give them a nudge” to move along the process of reviewing the Constitutional Reform Consultative Commission Bill.