(December 23, 2016) Today, teams from the Ministry of Public Infrastructure conducted physical assessments of pumps in Georgetown to determine flood intervention measures which can be implemented in response to today’s 3 to 4 inches of rainfall.

Among the teams were Minister of Public Infrastructure, Hon. David Patterson, and Minister within the Ministry, Hon. Annette Ferguson who visited several sites, including the Kingston, the Lamaha Street, the Muneshwer’s, and Riverview pumps. 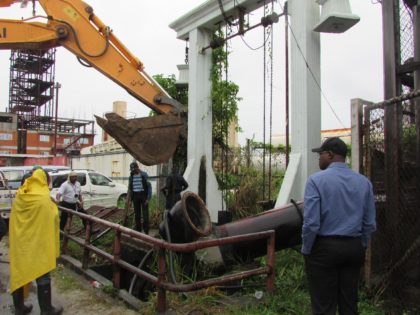 Works being carried out on the Cowan Street pump this afternoon (December 23, 2016). At right, Minister of Public Infrastructure, David Patterson, assesses the work.

Before the site visits, the ministers met with ministry officials for a briefing and to determine the way forward. During this briefing, concerns were raised on the ongoing high tide and the effects it could have on the flood intervention efforts. While normally sluices can be opened for up to six hours, with the high tide in effect, this time is cut down to about three hours. Today, sluices were opened from 04:00hrs to 09:00hrs before being reopened at about 15:00hrs. The sluices will close again at approximately 18:00hrs and will reopen at 04:00hrs tomorrow.

Efforts are being made to ensure that fuel is available for all operable pumps to guarantee continual work and the Ministry is also collaborating with the National Drainage and Irrigation Authority (NDIA) and the Mayor and City Council (M&CC) of Georgetown.

During the visits, Minister Patterson and Minister Ferguson met with pump attendants to receive status updates on the pumps’ operations. While M&CC has responsibility for five pumps, two of these pumps – the Lamaha Street pump and the Riverview pump – were found to be inoperable. As a result, the 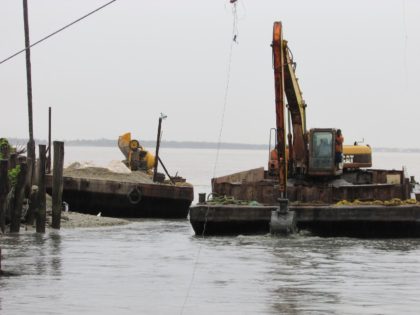 Today, desilting work was done at the Cowan Street outfall

Ministry will be mobilising additional pumps to assist the M&CC’s pumps. Two pumps will be installed later tonight at Muneshwer’s and Sussex Street while two smaller pumps will be deployed in Georgetown, including in the Queenstown area. These pumps will operate while works are carried out to the inoperable pumps; the Lamaha Street pump is expected to be back in operation by this evening while the Riverview pump will be up and running tomorrow.

Additionally, excavators have been deployed to the Cummings Canal, the Cowan Street Canal, and the Downer Street Canal. The Civil Defence Commission (CDC) is also in Albouystown, East Ruimveldt, and West Ruimveldt where emergency relief works are ongoing. The Kitty pump station is also working normally despite the recent collapse.

Meanwhile, the Ministry is urging residents to remain patient and to also make necessary preparations since rainfall is expected to continue tomorrow, though not as heavily.

Residents are also advised that sandbags are available at the Kitty pump station.