MY TURN | AMONG THE PANDITS

From childhood I have been familiar with the observance in my home and in my village of both events; and my upbringing has been influenced by their great moral teachings, especially that of tolerance.

For a while, I attended the Whim Hindu temple. I joined the Kirtan group, where I learned to play the harmonium and to sing bhajans. I also studied elementary Hindi. It was not a surprise for Sita and I to be married according to Jimala rites. We exchanged garlands or malas, of fresh flowers. That was followed by a puja at the Shiva temple, where we took our vows before Pandit Tiwari.

In 2016, Sita and I symbolically renewed our vows at the Shiva temple in Mahabalipuram, the ancient, historic 7th century world heritage site in Tamil Nadu, fifty years after our reunion at a Diwali Fair at Whim, my home village.

NEGATIVE COMMENTS
It was therefore cynical for persons to post negative comments on social media about the observance on Friday evening of Diwali Ustav, at the Baridi Benab, State House, which is the official Residence of President David Granger. It didn’t go unnoticed also that no coverage of the event appeared in yesterday’s edition of two of the daily newspapers.

Ever since he ascended to the presidency, President Granger has been the patron of celebrations that are linked to our major religions and our diverse cultures. For the Head of State to do so, is of national significance for our multi-ethnic, multi-religious and multi-cultural Republic.

Those putrid comments, however, are obviously charged with social bias and ethnic prejudice, and in ordinary circumstances I would have ignored them. But I know the contaminated, political source from where the racist scorn is flowing, and I feel that it is my turn to respond.

Over the years Sita and I have been attending key Muslim religious functions. On occasions when the President attended, I observed him lifting his hands in prayers, as Muslim worshippers were doing. At one of those functions, he must have seen my enquiring eyes. He leaned towards me, and said that while he was not a Muslim, many of the people who voted for him, are Muslims; and that he has high respect for them.

And, once whilst we were together at the Meten-Meer-Zorg mosque, on a lighter note, he asked me whether I had seen his name inscribed as an honorary member on a plaque at the mosque!

SINCERE LEADER
It is evident that President Granger radiates the aura of a sincere leader who recognises the universal message in all religions.

I recall, as I did before, my visit to the Whim Kali temple, when I became Prime Minister. I took part in the rituals. I did so as a tribute to the devotion of my parents, their Tamil ancestors and other believers.

I have been walking with the believers since 1961, when I started my association with the PPP. I have walked with the party’s pandits.

In Berbice, my first encounter was with the enigmatic Pandit Tiwari, whom we nicknamed “Churkiman”. He was tough, and taught us how literally to be foot soldiers. When our activists were on house-to-house campaigns, he would organise a jhandi in a particular village, only to provide us with free food, always “seven curries”.

Over many years, I worked alongside Pandit Sharma, Pandit Budhram, Pandit Ramlall and Pandit Harilall called “Gulzar”, all of whom, at some point, were members of the party’s leadership. Later, I encountered Pandit Misir, Pandit Reepu Daman Persaud and, last among them, Pandit Balchand Persaud, the former Moscow-trained Freedom House Manager and party executive. All of these pandits were personally loyal to Cheddi Jagan, his Marxist-Leninist ideology notwithstanding. They were the strike force in the inner-party balance of power, and were potent at the grassroots, “bottom-house” level.

AMONG THE PANDITS
I have long wanted to write about my life among the pandits, but for now I fondly remember two among them – Pandit Misir and Pandit Reepu Daman Persaud.

I remember the tall, gentle and always polite, Pandit Misir. He was invariably wearing a red tie, donning a felt hat, and always flashing a broad smile. For many years and at consecutive party congresses since 1965, he would help in serving the main meals. He would “dish out” curries with a long silver spoon. As he did so, he would make eye contact with the eaters, who were congress delegates. Softly, he would be heard saying, “I am Pandit Misir. Vote for me, please.”

During coffee breaks he would be handing out an assortment of colourful Soviet and Chinese booklets, and as he did so he would repeat the “vote for me” refrain. During my 50 years with the PPP, I have spent the longest time alongside the likeable, affectionate, iconic Pandit Reepu Daman Persaud.

After we won the 1992 elections, and before ministers were appointed, Panditji was identified for the post of Minister of Agriculture. Dr. Jagan asked me to talk with Reep, to ask him to resign as President of the Guyana Hindu Dharmic Sabha. I did what the President asked me to do. Reep’s calm, polite but resolute answer was, “tell Comrade Cheddi that if I have to choose between being a minister and being president of Dharmic Sabha, I will choose the latter”. Cheddi relented.

For standing his ground, on principle, Reep was able to build his legacy not only at the political level, but as the indisputable leader of the Dharmic Sabha, which today is the main driving force behind the organisation and celebration of Diwali and all other Hindu events and festivities. He was succeeded at the Sabha’s leadership by his daughter, Dr. Vindhya Persaud, who has followed in her father’s footsteps as a politician as well.

GRACE OF TOLERANCE
Always modest, Reep took his own home-cooked food to Cabinet sessions, where he would occasionally share his “veges” and “Prasad”. He sat among other believers and non-believers, but he was never a religious dogmatist.

Once, when I found out that Reep was not well, I took to his house in Prashad Nagar an American-Indian, Jim Humble, who was a chiropractor and a proponent of Holistic Medicine. After we arrived at his house, I told Reep that Jim would say a Christian prayer, and I hoped he didn’t mind.

Without hesitating, Reep assured me and Jim that he had no objection since, for him, “all prayers are to God”. Today, as we celebrate Diwali, let us banish narrow-mindedness, spite for and scorn towards our fellow human beings, whatever their beliefs or religion. I ask Guyanese from all social strata to invite into their lives the symbolic radiance of Diwali, and to invigorate their soul with bright hopes, for unity and the grace of tolerance amongst all of our people. 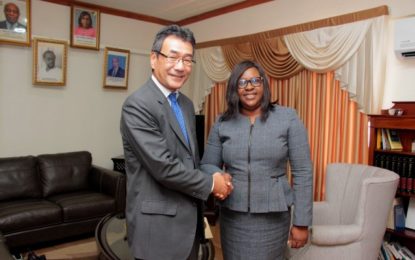