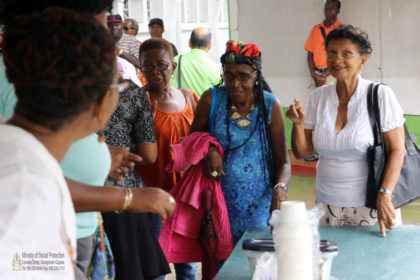 It is said “To care for those who once cared for us is one of the highest honors”; an honor which the Ministry of Social Protection does not take lightly.

As a result of the foregoing the Ministry of Social Protection did not fail to lend their support to an initiative of the National Commission for the Elderly in the distribution of breakfast to elderly persons who came out to collect their pension at the Bourda Post office and the Central Post office in Georgetown on 1st March 2017.

Members of the Commission, staff of the Ministry of Social Protection and volunteers assisted in the distribution of the breakfast which was available from 7:00hrs.

Ms. Everette DeLeon, Chairperson of the National Commission for the elderly, stated that the project is the first of many more to come. She said it is very necessary to have such projects for senior citizens who come out and line up as early as 6:00hrs to collect their pension every month.

The project was undertaken after talks with the Guyana Post Office Commission indicated that such programs are necessary.

Mr. Clifton Farley, Area Manager for the post office , stated “you can’t go wrong with such projects”, adding that what is most important is sustainability. 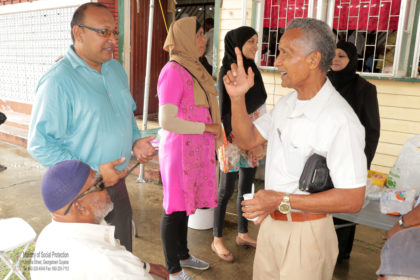 suggestions to the Ministry and in turn the Ministry is very happy to assist them in whatever way possible.  He stated “after the research indicated the necessity of the project, the Commission and the MOSP collaborated with the GPOC to bring the project to fruition”.

Research shows that the Central Post Office and the Bourda Post Office are the two post offices which see the most pensioners during pension distribution periods. Mr. Banwarie said in that light of this fact that it was most fitting to start with these two locations.

A passerby observed the activity and vocally expressed his satisfaction for the works of the Commission in collaboration with the Ministry.

The Pensioners were overjoyed and thanked those present indicating they are hopeful that this would be an every month activity as they would often times go and buy coffee; this was a good initiative where they could sit with those they would have forged friendships with and have a coffee and sandwich compliments of the Commission and MOSP. 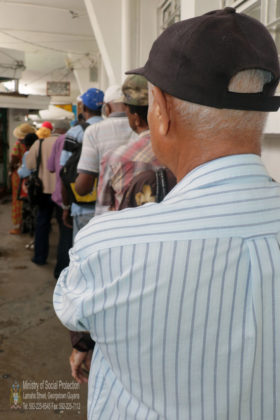 Mr. Smith, a pensioner residing in Hadfield Street, indicated his delight for such a program since many would leave their homes to make sure they get to the post office early; he also expressed a joy for not having to from spend any of his pension to get breakfast.

Ms. Nazeem Khan, a youth volunteer attached to the women’s arm of the CIOG, who assisted at the Bourda Post office said she feels an immeasurable amount of excitement beyond which she can articulate stating “it’s just such a joy to be here”.

The Commission would like to make special mention of Lloyd Austin from Austin Bookstore, Claude Raphael from Real Estate, Charles Vandyke from Eye Care, and  Sharon Green from ACDA without whom the project today would not have been a success.

It is the hope of the Commission that the project continues every month at different post offices around the country. Interested persons who which to lend support to this initiative are welcomed to get in contact with the Ministry of Social Protection or Ms. DeLeon of the National Commission for the Elderly.