New Amsterdam Municipality on the move

─ 900 streets lights to be installed in New Amsterdam

─ several streets to be renamed

The Municipality of New Amsterdam says it stands committed to the provision and supply of services and utilities for every citizen of the town.

During the municipality’s statutory meeting held in the Council’s chamber on Monday last, several matters were addressed including the evaluation of workers’ performance, the installation of additional streetlights, the constructing and rehabilitating of roads and culverts and the filling of vacancies.

Deputy Mayor, Wainwright McIntosh said it is essential for the performance of all employees to be assessed frequently. He urged all Heads of Departments and Councilors, to work to the best of their ability to satisfy the residents and affairs of the town.

“We are the face of the council… If systems are not put in place, we will encounter a relapse. So, I encourage us all to remain resolute and vigilant, and we need to influence our workers to take their work seriously.”

Kirk Fraser, A Partnership for National Unity (APNU) Councillor requested that sensitisation outreaches be held to notify the general public about the Mayor and Town Council’s (M&TC) by-laws and its responsibilities. Also, Fraser said an initiative such as this would reach the majority of the town’s residents. 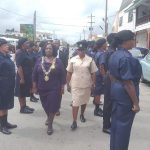 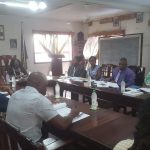 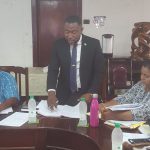 Relative to the installation of streetlights, it was highlighted that there are 900 lamps to be installed within the township.  However, according to Mayor Winifred Haywood, the project will commence shortly as the municipality awaits a response from the Guyana Power and Light (GPL) Incorporated.

In terms of the many vacancies to be filled, including that of a Public Relations Officer, a junior building inspector and three drivers, Human Resource Manager Cindy Watts, disclosed that, as was instructed by the Local Government Commission, advertisements for the vacant positions are already out, and applications are to be submitted by February 15.

Additionally, the Social Development Committee of the Council has rolled out several initiatives which will target residents of all ages. Already, the group has intended to fete 100 senior citizens for Valentine’s Day.  Councillor and Chairwoman of the committee, Patricia Lynch noted too that on March 8, a programme in observance of International Women’s Day 2019 is on the calendar of activities.

The council also communicated that facilities which are being occupied by youths residing in the town would receive developments. Deputy Mayor McIntosh has since pledged his efforts to resuscitate sports in the area.

Meanwhile, there were recommendations to rename Pope Street in New Amsterdam to W.O.R Kendle Street. Kendle had served as a Mayor of New Amsterdam and contributed significantly to the town. Additionally, a few streets in Glasgow Village on the East Bank of Berbice will receive new names.

A statutory meeting for the New Amsterdam Mayor and Town Council is scheduled for the last Monday in every month, excluding holidays.