His Excellency, President David Granger today, received letters of credence from the new Ambassadors of the European Union (EU) and Mexico to Guyana. During the ceremony, the Head of State committed to building upon the long-standing relationship with both countries.

The accreditation ceremony was held at the Ministry of the Presidency in the presence of Minister of Foreign Affairs, Hon. Dr. Karen Cummings.

The president said that Guyana has benefitted substantially from the EU’s development cooperation programme, especially in the agricultural, education, housing, public health sectors, as well as in its efforts to combat climate change.

“Guyana and the EU have collaborated within the ambit of the successive Lomé Conventions and the current African, Caribbean and Pacific Group of States: ACP-EU Cotonou Partnership Agreement. These arrangements establish a platform on which to construct a new generation of partnership for their mutual benefit. These agreements will assist in the realisation of the 2030 Agenda for Sustainable Development, including the Sustainable Development Goals to which Guyana is unequivocally committed,” he stated.

The European Union Ambassador to Guyana, H.E Fernando Cantó said that the EU is proud to have been a reliable partner and supporter of Guyana’s development initiatives for more than 40 years.  Of particular note, he emphasised the EU’s extensive contribution to helping Guyana maintain and rehabilitate its sea defences which become more and more relevant each day as we witness the harsh effects of climate change. 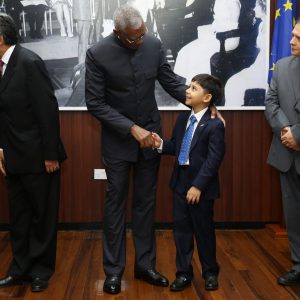 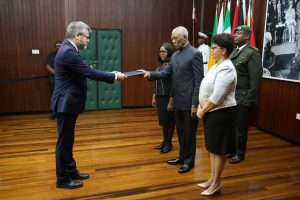 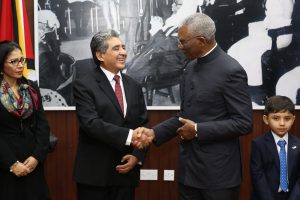 His Excellency, President David Granger being greeted by the Mexican Ambassador to Guyana, H.E José Contreras

Ambassador Cantó added that the EU looks forward to supporting Guyana’s efforts in other areas, such as security, and implementing the Voluntary Partnership Agreement on Forest Law Enforcement, Governance and Trade (FLEGT) in the years ahead. This is also part of the joint efforts to address the challenge of developing natural and extractive resources while preserving the environment and fostering sustainable and inclusive development.

Diplomatic relations were established between Guyana and the EU in 1975 and are premised on the common principles of equality, mutual respect, the rule of law and tolerance.

Guyana and Mexico also established diplomatic relations 46 years ago and have collaborated in the fields of agriculture, disaster management, education, oil and gas and trade. Mexico is also a valued market for Guyana’s rice. It has provided valuable technical support in disaster management; extended scholarships to build Guyana’s human resource capacity, and commenced cooperation in the oil and gas sector.

Mexican Ambassador to Guyana, H.E José Contreras said that his country will be seeking to strengthen relations in the areas of education. Both countries have aggressive agreements in scientific and technical cooperation, and therefore, “we can make the most of in sectors such as educations. For example, I think a big opportunity is teaching Spanish here in Guyana,” the Ambassador noted.