Prime Minister Moses Nagamootoo presented the Instruments of Appointment to some of the new members of the Boards of Directors of the state agencies; the Guyana National Newspapers Limited (GNNL) and the National Communications Network (NCN), today.

The brief ceremony took place at the Official Residence of the Prime Minister. Minister of State Joseph Harmon was also present at the ceremony. 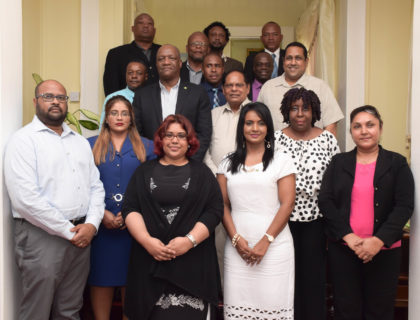 The Prime Minister highlighted how the government is seeking to create an environment of transparency and accountability through the provision of information.

“The incorporation of the new board members is taking place at a very auspicious time, when we are now repositioning our public communication platform to serve the people of Guyana, to be able to take information, as well as government policies, activities to the people who pay government to do these activities, and to enunciate these policies in their interest,” the Prime Minister explained.

He added that this new thrust of keeping the public informed started in May 2015, and is one that seeks to ensure that, “the public is serviced by their servants and agencies that they put in place to do the technical and professional work.”

Within this framework, the administration has started an outreach via radio to Mabaruma, Lethem and Bartica, “so that no section of our population can feel left out from the flow of information,” the Prime Minister said.

The government is also facilitating training programmes to incorporate indigenous people in the hinterland into the world of broadcasting, in addition to broadening the scope and content of the Learning Channel to reach more of the public, the Prime Minister explained.  The Learning Channel is the only medium in the country which allows for satellite connection to 16 locations across the country.

Minister Harmon also implored the new appointees to ensure that the public is given timely and accurate information. He noted that government has been doing a lot of good works of which the public is unaware, since they are not given information in a timely manner.

“We have had those kinds of complaints, we have had that kind of statements made, that we have been here for two years and we are doing nothing. We have heard that quite a bit, but I think it is to the extent which people have not been informed properly, it is that extent that those statements will hold sway in our society,” he noted.

He told the directors that the government expects that they give guidance and oversight to the state’s primary broadcast and print media entities. He also urged that they do so, with transparency whilst maintaining their integrity.

“We believe that your work is important, that whatever policy guidelines that you set, it is that, that will be reflected in the entities under which you have some control, and it is that information that would be communicated to the public,” he said.

The Minister of State also reminded the new appointees that the position is not about financial reward, but of providing a selfless service to the nation.

“I have the experience of many of our boards that when people actually get to working on them, they feel that this thing is too much work, and that the remuneration package is not enough, but this here is a call to service. This is a call for you to give service to your country and to your community,” the minister said.

Receiving their instruments for the GNNL Board were Chairman, Geeta Chandan-Edmond and other members Aaron Fraser, Karen Davis, Ruel Johnson, Sherod Duncan, and Hilbert Foster and from NCN, Chairman Enrico Woolford, Kamal Persaud and Dane Gobin.

The remaining members of the boards were absent due to their being overseas on training and other work. They will receive their instruments at a later date. 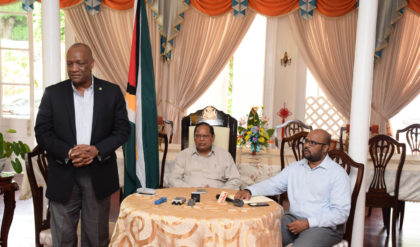 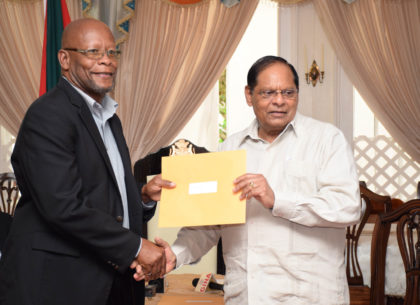 New Chairman of the NCN Board of Directors, Enrico Woolford receives his Instrument of Appointment from Prime Minister Moses Nagamootoo