Another year is here and the Neglected Infectious Diseases section of the Vector Control Services, Ministry of Public Health will be executing new strategies to effectively eliminate Lymphatic Filariasis (LF) by 2020. This is in keeping with Guyana being a signatory to World Health Organisation’s(WHOs)agreement with other countries to eliminate the neglected infectious diseases by 2020. 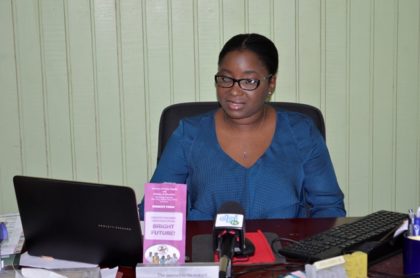 These new strategies will be incorporated into the Mass Drug Administration (MDA) exercise which is scheduled to commence in October of 2017. Programme coordinator, Dr. Fabu Moses told the Department of Public Information (DPI) this new approach can guarantee a more widespread coverage of targeted areas for the MDA.

Dr. Moses said, “… one of the strategies that is very new to Guyana but not to any other country is the MDA in schools. We chose schools and work places and other public places because this is where most persons spend most of their time when they’re out of their houses.”

Previously the MDA was done on a house to house basis, however the necessity to implement new strategies was realised. It is believed that more persons will be reached and the number of possibilities for persons to contract LF will be reduced significantly.

The elimination of LF, commonly known as ‘Big Foot’ began in 2001 with the promotion and use of DEC salt. “There was first the DEC salt campaign that many people would have known about and that was run in all regions of Guyana because it was based basically on selling salt in the supermarkets, the shops etcetera. so that people can protect themselves against the filaria worm.”

Later in 2009, the Mass Drug Administration was launched and rolled out in Regions Two, Six and Five. This year Regions Three, Four, Five and Ten are targeted for the MDA. These regions have been identified since they are heavily burdened with a number of persons diagnosed with the filaria worm.

Dr. Moses added that, “by next year, we will see the addition of other regions and in the following years you will see consecutive additions of other regions…We choose our regions based on the disease burdens that exist… and also the ease of access of the personnel etcetera to accessing treatment.”

This year the exercise is set to begin  in October and persons are encouraged to participate in this exercise as it will contribute to the greater health of the entire population. Health workers will be issuing the drugs at homes, schools, government agencies, businesses and health centres across the country.