Ombudsman to guide the Cricket Board Administration after injunction is abandoned 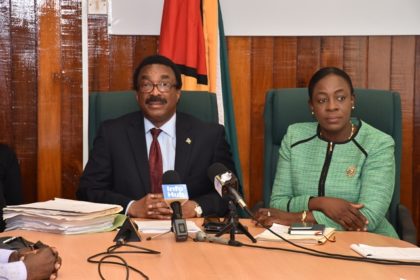 Attorney General & Minister of Legal Affairs, Basil Williams and Minister of Education (ag), Nicolette Henry addressing the Board Members of the Guyana Cricket Administration and other stakeholders.

Attorney General Basil Williams explained to the stakeholders, yesterday at a meeting held at his Chambers, that after the injunction was filed on April 29 2015 and entered the same day by then Chief Justice Ian Chang, the court said that the holding of elections is under the Guyana Cricket Administration. The hearing was then suspended, the minister explained, until determination of substantive action and it was then the members’ responsibility to follow the necessary steps.

“When this order was done making this injunction interlocutory, time started to run. It meant then that the plaintive had to file this statement of claim and actually take steps in proceedings. That wasn’t done, and so if you did nothing or took no step within a year then the matter is capable of being deemed abandoned”, Williams explained. He added that if the aforementioned occurred and was, “incapable of revival it’s a final order.”

Minister of Education ag. Nicolette Henry noted that since the matter is now an issue for the Ombudsman and given 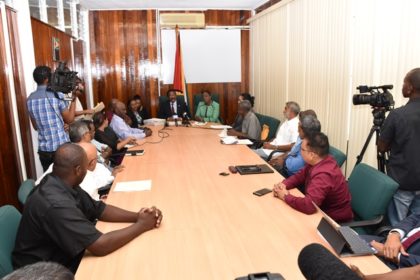 Stakeholders and Board Members of the Guyana Cricket Administration w being addressed by the Ministers.

that she has responsibility over the sports sector, she will do everything in her power to bring the issue to a halt.

“We are going to be working with the earliest possible timelines. That being said, I will first have to engage with the Ombudsman to determine the specific timelines and that’s when I can pronounce on dates.  It will not be very prudent of me and certainly and not fair to the ombudsman, to be giving timelines without even consulting with him. So far as having into regard the volume of work that would be required to be done, by that person”, the acting Education Minister explained.

Minister Henry is to meet with the Ombudsman next and then a meeting with the board member and stakeholders will follow soon after to determine the way forward.