Prime Minister Moses Nagamootoo, performing the functions of president, spent Thursday in Berbice where he addressed graduating students of the Corentyne Comprehensive High and the New Amsterdam Multilateral schools. 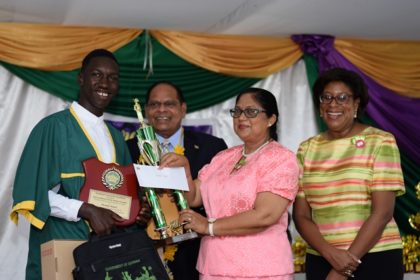 A former student of the Corentyne Comprehensive himself, Prime Minister Nagamootoo in the role of acting President, advised the graduates to reach for higher learning opportunities, to open new areas of knowledge that challenge the backwardness and ignorance of the past.

The Prime Minister also pointed the students in the direction of STEM subjects – Science, Technology, English and Mathematics in the furtherance of their studies.

“We have to move into a new mode of educating our children bringing up our students in the new generation that they should not be condemned to work under the sun like a mule, like a beast of burden with a bundle of cane on his or her head or bending to fetch water in the fields or to chop grass and weeds…and only science and technology can rescue you, can give you salvation. That you can become part and parcel of a new world, of a new country that is education driven, that is intellectually driven.”

An animated Headteacher Nirmala Somwaru-Husain noted the accomplishment of the school she oversees.

Prime Minister Moses Nagamootoo with some of the with ushers at the New Amsterdam Multilateral School.

“Schools like JC Chandisingh Secondary School and New Amsterdam Secondary School they get the cream of the crop when national grade six results are out and I want to tell you what their performance is, those two schools they tie at 79 percent. Corentyne Comprehensive high is at 78… that speaks volumes,” Somwaru-Husain said.

The best graduating student, Claudius Depoo was unable to attend, however, his proud parents collected his awards on his behalf.  It was noted that Murphy Bagot who secured second place did so whilst still grieving for his father who had recently died. Other notable performers were Vijay Mohabir, Parmeshwar Persaud, Kenisha Matheson and Rennae Bender

Meanwhile, passing out ceremony at the New Amsterdam Multilateral School the Prime Minister again encouraged the students to continue aiming high, particularly in fields of Science and Technology. 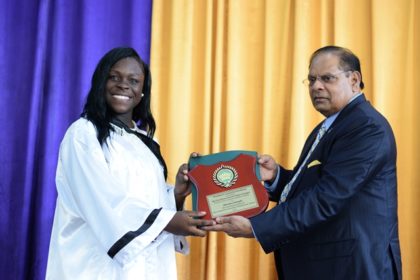 Sherlyn Semple of the New Amsterdam Multilateral School receives a plaque for being one of the best graduating students.

Eion Jotis and Sherlyn Semple were the two top performers of the New Amsterdam Multilateral.

Minister of Public Telecommunications, Cathy Hughes, while giving brief remarks reminded the graduates that there is currently a need for persons in the ICT sector. “I want to urge you to continue to study to acquire higher education whether it is at the University of Guyana, at a technical vocational institute or even online,” she emphasised.

The graduates were advised to never underestimate their abilities, to defy conventional thinking if needs be, and to take their rightful place in the world.