Managing Director of the Guyana Water Incorporated (GWI), Dr. Richard Van- West Charles said that the infrastructural flaws experienced under the Linden Water Supply Rehabilitation Project are a manifestation of the poor planning that plagued the water system.

Under the Linden Water Supply Rehabilitation Project, two water treatment plants at Linden and Amelia’s Ward, Region 10 were constructed in 2015, to the tune of $1.8 billion.  Immediately following their construction however, the two new plants had to undergo substantial remedial work after it was discovered that they were experiencing operational challenges.

The water company completed remedial works to the tune of $54 million to the plants in 2016, but works remain on-going to rectify many of the deficiencies in the two plants that should not have been presented, let alone within such short period of time after their construction, the official stated. 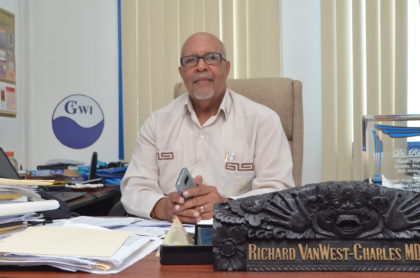 In a recent interview with the Government Information Agency (GINA), Dr Van-West Charles explained the planning for the two plants was wrong from the perspective that the technology used was the same for two different water sources.

“That’s a major flaw, and we are trying to make the adjustments and correct those problems,” Dr. Van-West Charles said. He explained that because of the filtration problems, the plants were “backwashing so frequently” that water was not flowing to the population.

The water company has since overcome the filtration problem which the plants were experiencing. To rectify the flaws, GWI had to install additional filter nozzles, air scour system and protective covering for chemical pumps among others.

GWI is now looking at the plants’ treatment processes, but the Managing Director remains adamant that it was not a “satisfactorily done” project. “That is a major problem… I met, it but I am not satisfied; the concrete work which was done to me it was poor,” he said.

As part of the planning process for the two plants, the treatment plants which existed at Mc Kenzie and West Watooka were decommissioned. When the flaws were realised, the water company had to proceed to rehabilitate these two old plants so as not to impede the continuous flow of potable water to residents. GWI rehabilitated the treatment plants at a combined cost of $49 million.

Dr. Van-West Charles explained that one of the positives coming of the botched work on the Linden and Amelia’s Ward plants was that the water company was able to identify and correct the competency gap which existed within its administrative structure regarding water treatment plants’ design.

“Internally we were dependent on a lot of contractors, but what has happened is that we had some Dutch colleagues who ran some workshop for our staff in water treatment plant design, and it is safe to say that a lot of our engineers have a better orientation and can actually plan for water treatment and understand the principles of water treatment, as pertained to what obtained prior to Linden,” Dr. Van-West Charles said.

The Linden Water Supply Rehabilitation Project was financed to the tune of US$12.3M from Inter-American Development Bank (IDB.) The loan was intended to finance infrastructure rehabilitation interventions to the water supply network necessary to meet current and future water demands.