Approximately 192 countries have already been extended invitations by ICAO. 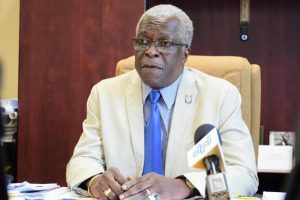 Director-General of the Guyana Civil Aviation Authority (GCAA), Retired Lieutenant Colonel, Egbert Field told the Department of Public Information (DPI) that the arrangements for the major event commenced in January of this year.

“The arrangements are moving ahead, we are halfway from the time we started. Hotels rooms have been booked. We have secured the [Arthur Chung] Convention Centre where the meeting will be held. We’re expecting 500 and 700 persons around the world. The President of ICAO, Olumuyiwa Benard Aliu will be here together with the 33- member council,” the Director-General explained.

He said a local steering committee comprising GCAA members and a National Organising Committee with ministries and agencies representatives are managing preparations. The committee meets every third Wednesday of each month and deliberates on issues, which are then worked on by the steering committee.

The authority is working to source sponsorship to fund the event which may cost approximately US$400,000 dollars, Field said.

“We have embarked on a process to secure sponsors from aviation entities and establishments not only from Guyana but from around the world. It’s a very large budget and we’re hoping that the sponsors can cover expenses from this conference, so as not to have the government spend a lot of money on this conference.”

The meeting will address sustainability, connectivity and the infrastructure of air transport, as well as facets of tourism and how aviation industry operates within the South American, Caribbean and African continents.

The Director-General is confident that the meeting will tremendously benefit Guyana especially in its quest to expand its aviation sector and by extension its economy.