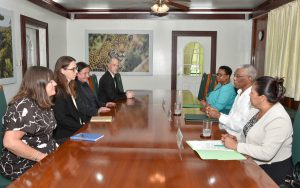 President David Granger, this afternoon, received a courtesy call from representatives of the Carter Center at State House.

President Granger, during the meeting, assured the representatives that he will act decisively on receiving advice from the Guyana Elections Commission (GECOM) as to its readiness to conduct General and Regional Elections.

The Carter Center representatives over the last week have met with Prime Minister Moses Nagamootoo, Attorney General and Minister of Legal Affairs, Mr. Basil Williams, SC; Leader of the Opposition, Mr. Bharrat Jagdeo and the Chair and Commissioners of the Elections Commission.

President Granger was accompanied by Minister of Public Health, Ms. Volda Lawrence who last Friday led a ministerial delegation at a meeting with the Chair and Commissioners of GECOM, and Minister of State, Mrs. Dawn Hastings-Williams.