President David Granger in his presentation at the Malaria Summit in London today proposed a four-pronged international approach to tackling the disease that kills millions annually.

Malaria remains one of the leading causes of death for communicable diseases in Guyana, therefore, the President said the country is committed to halving the number of malaria cases and deaths by the year 2023. 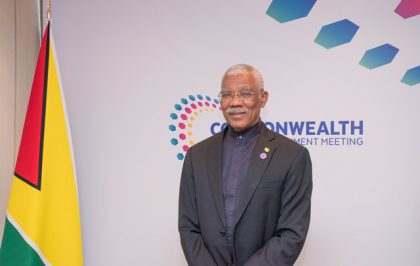 From the 2015 baseline of 8,329 cases, the Guyanese leader said significant national progress has been achieved in reducing the malaria cases.

“The total number of new cases declined by 60 percent between 2010 and 2015. Malaria unfortunately despite these gains highly resilient, a 5 percent increase in new cases was recorded in 2016 and again in 2017,” the President told leaders.

The highest incidences of these cases, the Head of State informed the summit, were recorded in the forested areas of Guyana where mining is the principal economic activity.

The President then proposed the four-pronged international support strategy to combat the communicable disease be directed towards protecting citizens against the spread of Malaria by the transfer of technologies from developed to developing and poor countries.

“It involves preventing and limiting vector-borne infections by the dissemination of quality health information, it involves providing improved tools for diagnosing and identifying active cases if Malaria regardless of species and finally by procuring high-quality combination Malaria treatment to ensure full cure of infected persons and to avoid drug-resistant Malaria,” he posited.

The London Malaria Summit, President Granger urged, must emerge with a realistic roadmap to end the global Malaria pandemic. Guyana, he reiterated, is ready to join with other nations to beat Malaria.

The President also extended best wishes for a successful outcome of the summit.

His Royal Highness Prince Charles of Wales also speaking at the summit, expressed worry that countries may underestimate the systemic threat the disease poses.

Prince Charles said the achievement of the United Nations (UN) Sustainable Development Goals (SDGs), of which Goal three speaks to the eradication of malaria, “is not part of some al a carte menu, it is the prerequisite of our survival …we simply do not have the luxury of deferring the actions to future generations nor is it fair that we should shackle them with the consequences of our inaction.”

The commitment shown in the fight against malaria, the Prince noted is an excellent demonstration of the Commonwealth “at its best.”

Statistics show that six out of the 10 countries most affected by malaria are members of the Commonwealth, these are Nigeria, India, Mozambique, Ghana, Uganda and Tanzania, many of which were represented by their leaders at the summit.

The November 2017 World Malaria Report showed that progress made to fight malaria had stalled, which posed the risk of all the work done so far becoming undone, at worst, a resurgence.

As a result, the malaria community united to put on the Malaria Summit London, under the theme, “Ready to beat Malaria.”

Ahead of this summit, leaders committed to halving the number of Malaria cases in their respective countries over the next five years.