The Ministry of Social Cohesion through the National Sports Commission today donated boxing gear to the Guyana Prison Service to benefit inmates of the Republican Boxing (prison) gym. 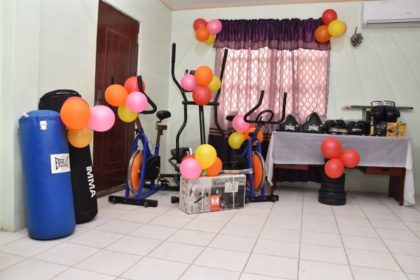 Some of the gear donated to the Guyana Prison Service Gym.

Minister of Social Cohesion with responsibility for Culture, Youth and Sports, Dr. George Norton said the donation will benefit sportsmen in the prison system, specifically those into boxing.

“We probably have future stars in the system. We have got to use every single individual, every single athlete. We must be able to give them that opportunity to exercise their potential,” Dr. Norton said.

Acting Director of Prisons, Gladwin Samuels expressed gratitude to the Ministry for the donation, since the prison gym lost all its gear, including a newly installed boxing ring in the Camp Street fire in July.

Director Samuels noted that because of boxing, several prisoners were able to make their way out of the system through their performances.

“The reality of it is, boxing has contributed to changing the discipline of many of the persons who are in prison. Many of those who were bad, we put them in the ring and after a period of time, the discipline improved significantly. So, this is an area we will be capitalising in 2018,” Samuels highlighted. 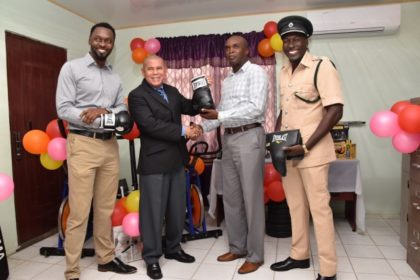 Meantime, Director of Sport, Christopher Jones commended the prison service for work done and revealed that one of the inmates was previously nominated for a sports award in 2016.

Jones said, “With continued support, we will make further donations to the prison service, so we will ensure those prisoners, not because they were incarcerated we will forget about them. There are talents that we harness in the prison service as recognised by the person who was nominated.”