─2 others to be commissioned in 2 weeks

The projects costing $1.6Million were implemented by the Rotary Club of New Amsterdam in collaboration with the Church of Jesus Christ of Latter-Day Saints. 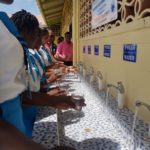 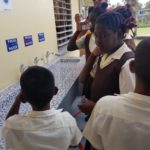 President of the New Amsterdam Rotary, Nolan France, told DPI the projects are part of the Club’s public-school Clean Water initiative. which focuses on ensuring students have access to clean potable water.  France further disclosed that the projects were among those identified for 2019-2020 by the Club and within two weeks two other schools – Rose Hall Estate Primary and Berbice Educational Institute – will also benefit from similar projects.

“…from today onwards this and other schools can turn the tap and can have fresh, clean drinking water every day,” France remarked.

Educator and Deputy-Mayor of New Amsterdam as well as a member of the Rotary, Wainwright McIntosh, noted that through the collaborative effort numerous students will benefit.

The Rotary’s Clean Water pilot project was first implemented in 2016 at the Canje Secondary School. Since then over ten schools within the region have benefitted from similar projects.