─ each NDC was each given $2.5M from the $5M set aside for 2019, NDCs will receive the remainder when they have completed expenditure of the first tranche

The ten Neighborhood Democratic Councils of Region 5, Mahaica-Berbice have received a $25Million first tranche of subvention for 2019 developmental works.

Each NDC was each given $2.5M from the $5M set aside for 2019 and are now utilising the funds to start projects they had identified for their respective communities. 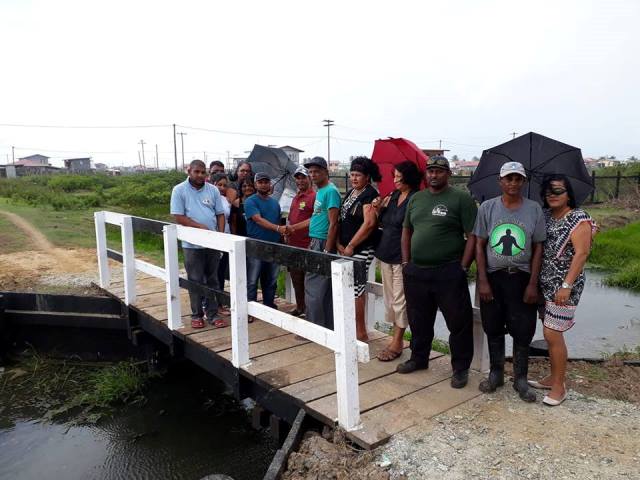 (Flashback): Councillors of Bath/Woodley Park NDC at the commissioning of a bridge linking two villages built with the assistance of the Government subvention of 2018 (Courtesy B/WP Facebook page).

According to Deputy Regional Executive Officer of Region 5, Sherwin Wellington, the NDCs will receive the remainder when they have completed expenditure of the first tranche.

Wellington disclosed that three of the NDCs had opted to spend their subvention on extending and upgrading their village offices. These are the Woodlands/Bel Air NDC, the Union/Naarstigheid NDC and the Tempie/Seafield NDC.

The remaining seven have opted for acquiring road building material to improve the quality of their streets; on fencing and general aesthetics of their offices and drainage tubes.

Wellington said that all the NDCs had made good use of their subventions last year and were eagerly looking forward to executing subvention aided projects within their communities this year.

Another official had recently observed that rates collection by many of the NDCs which should be funding their developmental programs have been generally inadequate.

The subventions were increased by the government from $4M to give support to NDCs countrywide so that they can realise some of the programmes for improving the quality of the environment and other amenities in their communities.