Georgetown, Guyana – (August 7, 2017) A 25-year long wait, yesterday, came to an end when 22 residents of Upper Demerara-Berbice (Region Ten) and former employees of the Linden Mining Enterprises Limited (LINMINE) received titles to the lands they have been occupying from Minister of State, Mr. Joseph Harmon. At a simple handing over ceremony held at Watooka House, Minister Harmon congratulated the recipients, noting that they had been neglected for far too long. 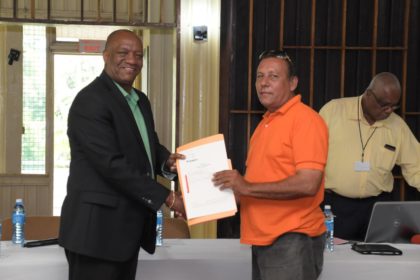 Minister of State, Mr. Joseph Harmon presents the titles for the lands to residents of Upper Demerara- Berbice (Region Ten).

These residents have lived in this area on the East Bank of the Demerara River in Mackenzie in houses built by the bauxite company for its employees. A programme of selling these properties to employees started in the late 1960’s and at the time of vesting the lands to NICIL, there were a number of employees, who had signed sales agreements, but the titles were never transferred to them.

The lands had been handed over to National Industrial and Commercial Investments Limited (NICIL) by vesting order in 2005 by LINMINE after an injunction was passed as a result of a case brought by Mr. James Ramsahoye to force the company to honour a prior judgement for wrongful dismissal. That injunction effectively blocked the transfer of titles by LINMINE to its ex-employees. Minister Harmon described the former administration as insensitive to the needs and plight of the residents as it failed to take action to ensure the matter was resolved even after the court matter was settled.

The Minister said that during a visit to the region last year, he received numerous complaints about the situation. He immediately convened a meeting with the regional officials, Head of NICIL’s Board, Mr. Horace James and other stakeholders and instructed that those complaints be addressed. “It was just a question of uncaringness of the Government at that time. A process has been put in place for those, who are receiving transports and titles. Twenty-two titles were handed over and it ends the process for which transactions began since in the 1980s but which were never completed because of a number of legal obstacles, which have now been resolved. The delay in granting these titles was also due to the fact that no work was done to grant the titles by the previous administration even though the processes were completed and vesting orders were published,” Minister Harmon said.

One of the beneficiaries, Mr. Morris Reece, who lives in Industrial Area, Linden said that while he had initially gotten tired 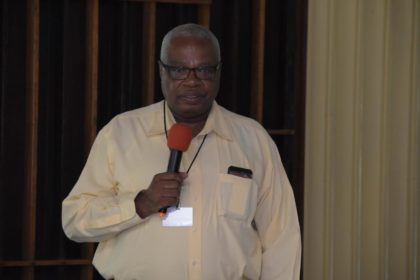 Chairman of the Board of the National Industrial and Commercial Investments Limited (NICIL), Mr. Horace James delivering remarks.

of waiting for the matter to be resolved,  Minister Harmon’s reactiveness convinced him that his dream of owning the land would have been realised.  “Today my dream has come through. I have been waiting 25 years and over, hoping and waiting for this day and today I am collecting my title. This is a good move by the Government and I really want to say thank you to Minister Harmon and the entire Government,” he said. Ms. Bibi Ameena, also from Industrial Area echoed those sentiments. “Oh God, I am so thankful. Right now, I feel so proud, so thankful. I really feel good about this because I waited such a long time for this day to come and I want to say thank you very much,” she said.

Minister Harmon said that the David Granger led administration is committed to ensuring that sustainable, family oriented communities are created across Guyana. He noted that this exercise is part of a process of regularisation of land and property issues across Guyana by the Administration, which has a specific aim of creating communities where families can grow and thrive as a unit.

The Minister of State said that the granting of titles to establish rightful ownership to deserving persons will help to improve their quality of lives and the status of their communities. 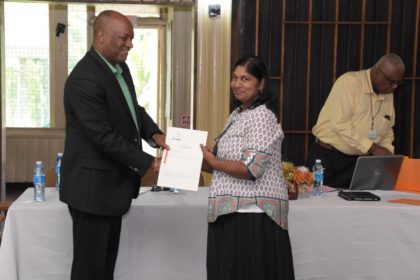 Minister of State, Mr. Joseph Harmon presents the titles for the lands to residents of Upper Demerara- Berbice (Region Ten).

Minister Harmon said, “We are not going to be constructing housing schemes. We are developing ‘liveable’ communities. Houses are where families live. Families are the basic cells of communities and communities are where people are socialised. The emphasis is, therefore, on housing as an integral part of communities. Government’s policy, therefore, is to promote housing within the context of community development. Government housing programmes will go beyond the provision of house lots and housing units. It will cater to the needs of residents.  Existing housing schemes will benefit from infrastructural upgrades while new housing schemes will be designed in a manner, which provides a safe environment and infrastructure, access to quality public services and facilities to promote livelihood of our people.”

The Minister of State said that the housing plans over the past two decades have been bedevilled by problems including the cavalier approach to land distribution, prohibitive cost of housing lands, abysmal infrastructure within the communities, failure on some part of private developers to meet their contractual obligations, sloth of the processing of land titles and shoddy works on houses. This Government, he said, will ensure that citizens can live in an environment in which they can enjoy the ‘good life.’

“In this regard, work is ongoing with respect to Indigenous peoples’ land titling as well as the joint or communal ownership of lands by freed African slaves and their descendants. The Government along with all stakeholders will bring closure and resolve these issues in relation to land that has remained unresolved for many years. In addition, Government is also working towards establishing programmes that will guarantee sustainable use of land, while ensuring land resources are used for the improvement of the livelihood of all of our people. I urge you to improve your property and to utilise the resources that can be utilised productively for the improvement of your lives and the enhancement of the communities,” he said.

As Guyana continues to forge ahead with its ‘green’ development agenda, Minister Harmon told the residents that they have a role to play in the achievement of this goal and it is their responsibility to take care of their environment and ensure the proper disposal of their refuse. He also urged them to plant trees in their yards to help mitigate the effects of flooding and other disasters, caused by climate change.

Meanwhile, Mr. Horace James, Chairman of the Board of NICIL, said that the company is committed to seeing this process to a resolution. “This has been a very long wait. I have seen letters written starting the process since 1964 in some cases and there were a number of reasons for not completing the process. There was communication and then no communication on both ends and all of that but as a company, we will make contact with you and will ensure that we keep you updated and carry out this process through the end,” he said.