The Ministry of Communities’ Action Roundtable for Regional Development 2018 will seek to aggressively address the plethora of challenges in Regional Personnel Management. The discussions are being held under the theme “Strengthening Governance through Human Resource Development and Planning in a Green Economy.” 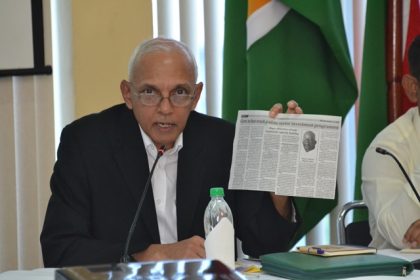 Minister of Communities, Ronald Bulkan, speaking at the opening ceremony today, challenged the regional administrative heads and other representatives to do better in 2018 with emphasis on human resource development.

While reflecting on 2017’s accomplishments, the minister acknowledged much was achieved but more could have been done in the furtherance of the respective regional work programmes.

This Government is resolutely committed to decentralisation and people’s empowerment, given its policy, according to Minister Bulkan who noted: “decisions should be made as close as possible to the people who are affected by them.”

He expressed that it is important that regional leaders are in tune with that vision to ensure there is a strong expression of regionalism. “Stronger regions are the vehicles that will ensure that citizens regardless of where they may live have equal quality of public services and an improved quality of life.”

Article 72 (1) of the Constitution of Guyana, Minister Bulkan emphasised, makes it abundantly clear that the regions are not appendages of the Central Government.

Quoting from a speech made by President David Granger, the Minister told regional representatives that, “You are not a little bunch of Central Government, you are administering whole regions”.

The management of geographical spaces larger than many Caribbean countries, the Minister said, highlights the importance of Regional Executive Officers (REOs) within the governance structure. 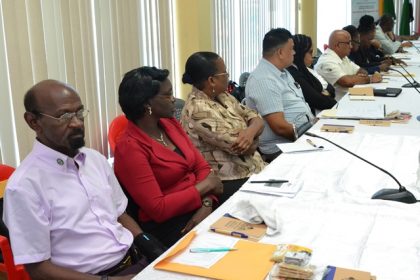 Regional representatives at the Action Roundtable for Regional Development 2018.

Every REO, the Communities Minister said must be guided by this vision regardless of how large or small the task.

This vision was articulated while this Administration was in opposition, he recalled, and it is one that is being promoted and executed with evidence to support.

In addition, Minister Bulkan said implementation of the Public Service Investment Programme (PSIP) lies in the investment in human capital.

“A Public Service that is equipped with the knowledge skills and commitment is essential. It is our regional public servants who are directly responsible for the implementation and execution of the policies and programmes of our Regional Democratic Councils.”

Challenges in relation to staff shortages particularly in the Hinterland have prompted the Ministry to place a greater focus on human resource development.

It was explained that the Action Roundtable is not just about complaints, rather participants will aim to strategise in order to aggressively confront impediments to the implementation of the PSIP.

Action and solution, the Minister emphasised, should be the guiding words throughout the discussions.