Repairs of Liliendaal Bridge ahead of schedule

The Ministry of Public Infrastructure is working to complete the rehabilitation of the Liliendaal Bridge before the initial deadline of July 2017. Works commenced in early March to prevent a collapse of the bridge. 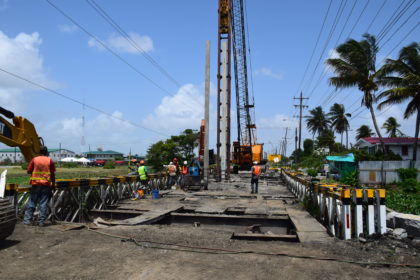 Contractors working on the Liliendaal Bridge

Permanent Secretary in the Ministry of Public Infrastructure, Geoffrey Vaughn, said that efforts have been intensified to complete the repairs before the end of June.

The bridge had shown signs of imminent failure. One of the panels had detached making the bridge unstable.

The Permanent Secretary pointed out that the Ministry is also working to upgrade other bridges along the railway embankment to a similar structure. “For years, most would have been acrow panels bridges (bridges made up of metal panels)  and so we are changing a few of them. This year the Liliendaal Bridge is being done, we will move on to the bridges at Plaisance and we will keep going on to try to change all the bridges on the railway embankment,” Vaughn underlined.

The rehabilitation of the Liliendaal Bridge is being carried out based on recommendations from the Demerara Harbour Bridge Corporation (DHBC) Inspection Team and engineers attached to the Ministry of Public Infrastructure.

The $89M project is being undertaken by H. Nauth & Sons Civil Engineering Contractors. 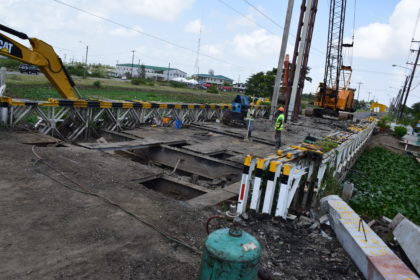 Ongoing repairs at the Liliendaal Bridge