This was highlighted during an in-house meeting with the hospital’s department heads and Regional Democratic Council representatives. 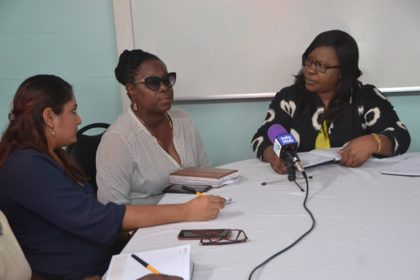 Earlier this year, the Ministry of Public Health (MoPH) agreed to strengthen security at the West Demerara Regional Hospital (WDRH), after doctors and other health workers highlighted the facility’s poor arrangements. There were also charges of verbal and physical abuse meted out to hospital staff by residents of Region 3, Essequibo Islands/West Demerara.

WDRH Administer Sanjay Persaud explained that the 24-hour security provided by the Guyana Police Force (GPF) stationed at the outpatient department has improved, however, the facility is encountering issues “in terms of efficiency” with the security personnel.

Deputy Regional Executive Officer (DREO) Jennifer Ferreira-Dougall explained that the contracts, to hire the security firm attached to the hospital, were signed by the Ministry of Communities; which leaves the regional administration’s hands tied until the conclusion of the contracts validated for October month-end.

Minister Cummings reiterated that the hiring of new security personnel to ensure the safety of the hospital’s staff will be welcomed.