Distinguished diplomat Sir Shridath Ramphal says any decision handed down by the International Court of Justice (ICJ), on the territorial controversy between Guyana and Venezuela, will be binding.

“Unfortunately, pretty wild things have been said in Guyana which were far from legally accurate and this is totally different from the advisory position that is possible under the [United Nations] Charter, this is not an advisory opinion,” Sir Shridath Ramphal said responding to local media questions on the sidelines of the Guyana Petroleum Business Summit and Exhibition (GIPEX) held at the Marriott Hotel, Kingston, Georgetown today.

Sir Shridath Ramphal noted that the 1966 Geneva Agreement was signed under the context that the United Nations (UN) Secretary-General (SG) had the right to choose the World Court as recourse to settle the controversy.

He also warned Guyanese to not be misguided by “wild opinions” being published in local media on whether the ICJ can adjudicate the controversy. “This is not a time for Guyana to argue these issues in Guyana with Guyana,” he said.

Guyana is currently preparing to defend its territorial integrity at the ICJ against Venezuela’s contention that the 1988 Arbitral Award is null and void. Last week, the UN Secretary-General announced that it is referring the long-standing border controversy to the ICJ for settlement. 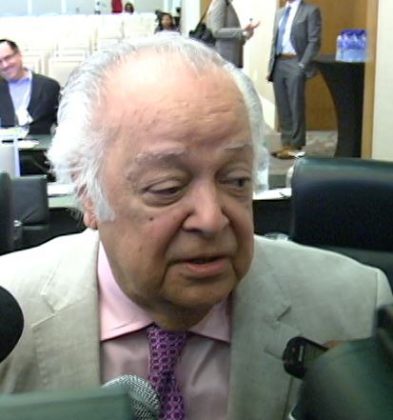 Ambassador Sir Shridath Ramphal, speaking to media on the sidelines of GIPEX meeting in Georgetown.