One hundred students will be participating in the National ‘Skip to my Lou’ Jump’ rope team championship 2017 scheduled for September 28 at the Cliff Anderson Sports Hall.

The students comprise of fifty (50) primary and secondary school respectively, and each school team will include five jumpers who can participate in the various categories including individual freestyle, individual single rope, double Dutch teams and last man standing. The winners from the various events will obtain a laptop each. 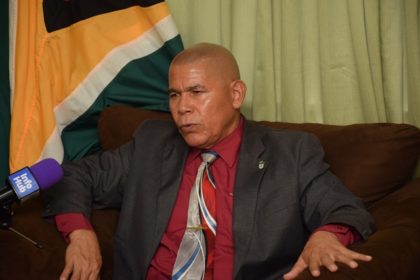 This collaborative effort, which is part of the Education month activities, was announced at the Ministry of Social Cohesion’s boardroom, on Thursday, September 21, 2017.

Minister of Social Cohesion Dr. George Norton lauded the benefits of the competition, “There is no doubt about the fact that this competition has numerous benefits, one of which is the fostering of Social Cohesion. Participants will be able to develop better interpersonal skills through interaction with others from various Educational Districts while it will also allow the students to engage in team-building.”

He opined that the championship will also assist in the participants’ development of motor skills, physical capabilities such as resistance, speed, coordination, and rhythm among others.

Troy Peters, Branch Manager, Banks DIH Limited, shared that his company was one of the first to support the inaugural National Jump Rope Competition held in Linden in 2014. He said that it provides a platform for youth involvement in positive physical activity.

Francis Simmons, General Manager, National Data Management Authority (NDMA), speaking on the behalf of the Minister of Public Telecommunication Catherine Hughes said, even as his ministry pushes for internet access in schools this initiative supports creating a balance between physical activities, electronic use, and school work.

“Our children’s current and future health both mental and physical depends on this balance. My only hope and wish is that more of these activities are planned and executed now and in the future”, he explained.

The championship is spearheaded by the National Sports Commission (NSC) with the support from Banks DIH Limited and the Ministry of Telecommunication among others.

Earlier this year (2017), Guyana for the first time will participate at the World Jump Rope Championship and Camp, billed for July 1 – July 10, at the University of Central Florida in Orlando, Florida. It was a five-day event which included all the disciplines of rope skipping, followed by a two-day World Camp. There was also a Coaches Certification workshop as well as Judges training sessions.