Georgetown, Guyana – (November 23, 2017) As the Ministry of Social Cohesion continues its mandate to foster a more unified society, it hosted its second Diversity Education and Inclusion Workshop with stakeholders from Community Policing Groups (CPGs) in Demerara-Mahaica (Region Four), a group it identifies as an important development partner. Fifty-one stakeholders from CPGs in ‘A’ and ‘C’ division, students Camille’s Institute of Business and Science and other stakeholders attended the session, which was held at the National Racquet Centre, Woolford Avenue, Georgetown this morning. 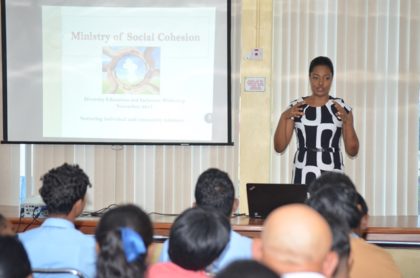 Technical Officer, Ministry of Social Cohesion, Ms. Olive Gopaul, who coordinated today’s session said that there are many benefits to be had across communities which will, in turn, promote solidarity and aid development. “When we talk about the benefits, it’s not just about co-existence benefits, we’re talking about socio-economic benefits, we’re talking about benefits as a result of embracing an appreciation of one’s differences so that there can be cultural tolerance,” Ms. Gopaul said. She also encouraged the participants to practise what they would have learnt in the workshop when implementing their community development projects.

Meanwhile, Administrator for Community Policing in Guyana, Mr. Dennis Pompey, said that the programme would be able to empower members of his policing group to better address social issues within the communities. He also said that developed communities would, by proxy, lead to a better developed country.  “If you’re going to develop your community, you need that unity and that bond and once your community is developed you would be able to extend that to your country,” he said.

In August, thirty-two stakeholders, who serve in three divisions of CPGs along the East Coast Demerara also benefited from this workshop. 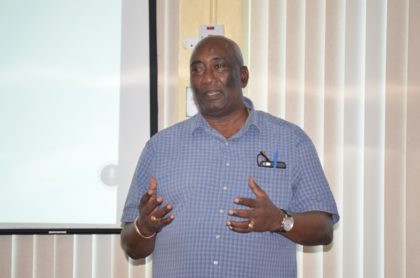