Georgetown, Guyana – (June 27, 2017) The Ministry of Social Cohesion’s first Diversity Education and Inclusion Training Workshop for regional officials and municipal councillors was launched today in the boardroom of the Linden Enterprise Network (LEN) in Linden. In addition to the regional officials and Linden Town Councillors, a number of other stakeholders are also attending the two-day workshop bringing the number of participants to 32. 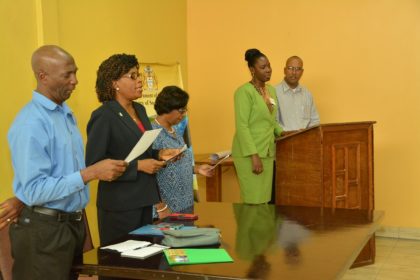 Programme Coordinator at the Ministry, Ms. Sharon Patterson said that this training session follows closely on the heels of the sensitisation workshop for regional and municipal councillors, which was held in May, at the request of the region.  Ms. Patterson urged the participants to fully engage in the training as it aims “to help persons [to] deepen their understanding of cohesion… and have a better understanding of what they can do as individuals, groups and communities to foster the process”.

Meanwhile, Regional Vice Chairman, Mr. Elroy Adolph said that he was pleased that the Ministry has provided another opportunity for residents to learn more about social cohesion. “Years ago… people used to work together to develop the community; they worked together to develop our country and seeing that we have the Ministry of [Social] Cohesion taking [on] such a role… let us come with our minds open and after these two days prepare in our hearts to really make a better community; make a better region,” he said.

In an invited comment, Regional Councillor, Mr. Antonio Hackett said that while he was previously unsure of the content of the workshop he has already found the initial sessions to be rewarding. “This is helping me as an individual because I’m aware of the fact that I, myself, have prejudices. I think they are deep seated… but I will better be able to deal with people as a member of the public and a public figure. This is going to help me to deal with them even though I don’t particularly share their beliefs; I have to respect [them]. So indeed this will help me so that first part of this session has already impacted on me positively,” he said.

Similar sentiments were expressed by Ms. Sonia Fraser, Education Officer at the Department of Education. In an invited comment, she said, “The major point that has been brought out so far is that we need to put aside prejudices and to focus on the issue at hand so that we can be just in whatever we go to do and so if we want to have social cohesion… I think we need to put aside all the other differences and just look at a person as a human.”

Today’s workshop is the 36th training session that the Ministry has hosted countrywide and the third in this region. 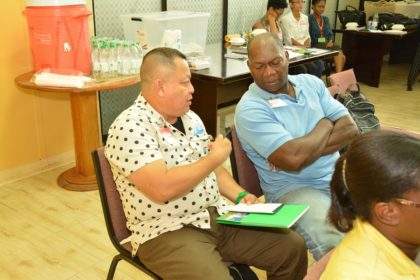 These two gentlemen engage in discussions after participating in a ‘Being human’ activity, during the interactive session of Ministry of Social Cohesion’s first Diversity Education and Inclusion Regional Training Workshop for regional and municipal councillors. 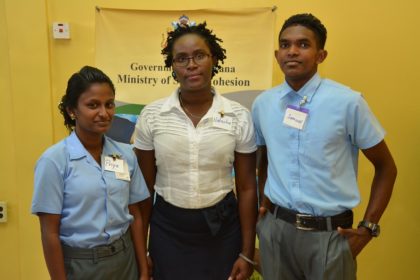 Ms. Natasha Noel, a lecturer at the Linden Technical Institute and two of her students at the Ministry of Social Cohesion’s first Diversity Education and Inclusion Regional Training Workshop for regional and municipal councillors. 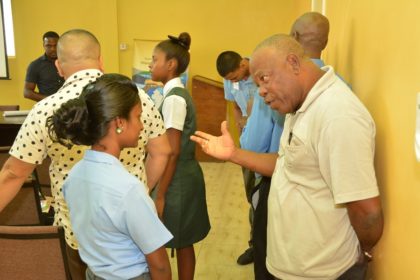 These two participants engage in a ‘Sharing’ exercise, during the interactive session of the Ministry of Social Cohesion’s first Diversity Education and Inclusion Regional Training Workshop for regional and municipal councillors.