A $264M solar farm expected to be set up in Mabaruma next year, will be the first of its kind in Guyana. 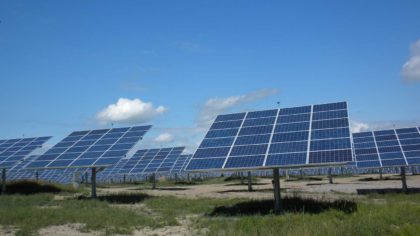 This initiative will be a new means of providing electricity to the residents of the Region One town.

Minister of Finance, Winston Jordan said that government is moving towards setting up a number of other solar farms in the hinterland regions in areas such as Bartica, Region Seven; Mahdia, Region Eight and Lethem, Region Nine.

When operational, the 400 – kilowatt solar farm will afford an additional 17 hours of electricity to the 3,000 residents of Mabaruma, Jordan said.

“Furthermore, our Government has also advanced the pursuit of additional solar farms with a capacity of 800 kilowatts at Lethem, 400 kilowatts at Mahdia, and 1.5 megawatts at Bartica,” the Finance Minister explained.

This announcement was made as the 2017 National budget valued $250B was presented to the National Assembly by the minister on Monday.

Residents in Mabaruma are supplied daily, with a mere five hours of electricity from 17:00hrs to 22:oohrs from the Mabaruma Power Company.

Consultations have been held with investors, power companies, energy agencies and firms along, with other key stakeholders on the project.

Before its implementation, additional consultations will be held with residents of Region One.

Minister Jordan also announced that investors and other persons involved in direct importation of items for energy efficiency, as well as those investing in water treatment plants and other facilities, can benefit from tax exemptions.

“To complement public sector investment, the Government will be granting a one-off tax holiday of two years for corporation tax to importers of items for wind and solar energy investments, and for investors in water treatment, waste disposal, and recycling facilities. These interventions, when finalised, will significantly improve the lives of our people, especially in the hinterland, by incentivising behavioural change, boosting investor confidence, and ensuring energy reliability,” the Minister pointed out.

Meanwhile, the government is pursuing the development of hydro-power resources. Studies and data collection exercises can be expected in 2017 as there is intention to venture further into this form of energy.

Minister Jordan highlighted that, “In the pursuit of best practice and due diligence, the Government will conduct further geotechnical studies for the Moco Moco hydro-power development project. The results of the geotechnical studies, which are expected to be completed in 2017, will be used to invite bids for the hydropower re-development contract. Also, in the coming year, we will see data collection studies being conducted on wind energy via a demonstration wind project,” the Finance Minister explained.

Government will prioritise evidence-driven and cost-effective options to determine renewable energy choices across the country.

A review of the Amaila   Falls   hydro project which was undertaken by   Norconsult,   the Norwegian-contracted consultants, will be released shortly, the Minister disclosed.

The measures under the renewable energy programme proposed by the government for 2017 are in keeping with the green agenda. This green development or green pathway sets out a vision taking a broad, multi-dimensional approach towards achieving a “good life” for all Guyanese, the minister stated.