Squatter settlements will not be tolerated – Valerie Patterson

The Government through the Ministry of Communities, Department of Housing is determined to regularise squatter settlements. The un-authorised occupation of state reserves in the city and its environs is preventing the execution of much needed infrastructural works. 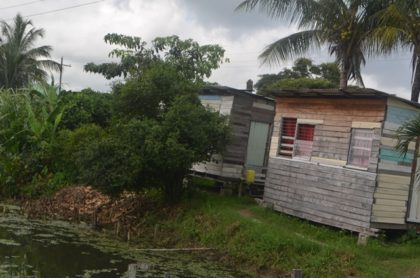 Buildings along state reserve in Sophia

More than 700 structures occupy state reserves in Georgetown and its environs. Minister within the Ministry of Communities, with responsibility for housing, Valerie Patterson said this situation must change.

“We have to bring order to Georgetown. We have to clean up because it is difficult for DNI, Ministry of Public Infrastructure. It’s virtually impossible for them to go in there and do any kind of cleaning of those canals, repairs to the roads,” the minister said.

Noting that the previous administration allowed the situation to deteriorate, Patterson said much could have been done earlier to curtail squatting. She noted the presence of squatting areas in Sophia, East and West Ruimveldt, Tuschen, Linden and numerous areas in Berbice.

According to the minister, many persons on the reserves would have received house lots in housing schemes where they would have built their homes but, still remain on the reserve while they collect rentals for the house they own in the schemes.

Patterson said she will “have no mercy” on such persons. She said these persons would be given a timeline to remove from the reserve and if they do not, then the Department of Housing would have to break the buildings down. 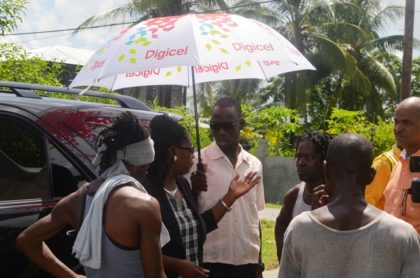 Hon. Minister Valerie Patterson, Minister within the Ministry of Communities with responsibility for housing in discussions with Sophia squatters, recently

While the minister acknowledged that many people who occupy state reserves are victims of circumstance, she remained firm that the ministry will do what is necessary to bring an end to the situation. She said squatting is against the thrust of the government to develop holistic housing solutions for citizens.

Meanwhile, Patterson is encouraging those who occupy the reserves to apply for a house lot in the regions where they live. She said the only way to secure a house lot or apartment through the government is to apply for one.

According to the Minister, her department is exploring the possibilities of collaborating with charitable organisations to aid in the development of affordable housing units for squatter families.

Land has already been identified on the East Bank of Demerara and the planning department is looking at low cost housing options.

Since taking office in May 2015, the coalition government has named regularization of the housing sector and developing more integrated communities as one of its priorities.