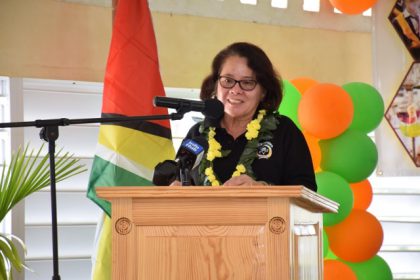 The First Lady, who has been a champion for the implementation of the STEM programme in Guyana, delivered the feature address at the launch, underscoring the importance of STEM education in future developments, expansion and maintenance of energy security in Bartica and across the country. Mrs. Granger lauded the OCC and the CCCCC or 5Cs for their respective roles in making the programme possible. “I applaud the vision and the efforts of the Office of Climate Change and the 5Cs for supporting it to ensure that the children of this region will have the skills required to survive and thrive in the world we inhabit, through the establishment of STEM clubs and the children’s participation in electronic leagues, which will test and improve their skills in Mathematics, scratch programming and robotics,” she said.

Reviewing the success of the STEM programme since its launch in August 2016 in Guyana, the First Lady recalled how well the Guyana team performed at the 2017 First Global Challenge in Washington, D.C. where they placed tenth out of 165 countries. She encouraged all teachers and education representatives to rethink their approach to education when dealing with students in this new age of learning. “Children who are not performing optimally in the traditional subjects taught in our schools should not be automatically shut out of any activity that will engage their interest and spark their enthusiasm, an enthusiasm that can likely spill over to interest in developing skills in other subject areas,” she said, adding the examples of Bill Gates, Steve Jobs and other successful individuals, who were college dropouts, but who contributed tremendously to the technology sector.

Stressing on the importance of a new approach to education also was Chief Education Officer, Mr. Hutson, who said that it was time for Guyana to move away from the traditional ‘chalk and talk’ approach to learning onto a more ‘learning by doing’ approach in the classroom. “As we prepare new generations to live well in a changing world, we recognise that learning by doing is an essential part of education for sustainability. For too long our children have not been doing well in the classroom because learning would have been reduced to just ‘chalk and talk’ and now we are moving beyond that because we recognise the importance of our children actively engaging in the process of education delivery,” he said.

Meanwhile, Mayor of Bartica, Mr. Marshall, described the launch of the STEM programme in Bartica as the ultimate investment in the future of Bartica youths. “This programme has the potential to equip you with tools needed to ‘green’ Bartica. This project increases your ability to materialise ‘green’ solutions. Science, Technology and Mathematics are areas key to ‘greening’,” he said.  The Mayor urged the students to fully utilise the opportunity presented to them as it would be their inventions that would boost the development of Bartica.

In an invited comment, the Headmaster of Three Miles Secondary School, Mr. Daniel Williams, said he is elated about the introduction of the programme as he believes it will benefit his students significantly. “I am happy that our school was selected because this activity is a hand on activity for the students. They can learn by using their hands and even to the child that may be considered a slow learner would be able to work with this programme. They will be able to build robots and get ideas. The children are very excited and ready to work,” he said.

Many of the students shared similar feelings of excitement, describing the programme as enjoyable and fun.

The Government of Guyana through the OCC, had received financing from the Government of Italy in partnership with the Caribbean Community Climate Change Centre to support a project called “Transitioning to National Energy Security” (TNES) for the Bartica community. The project, which is being executed by OCC, aims to establish a reliable point of reference for the existing state of energy in Bartica.

The OCC, taking into consideration the work done by the Ministry of Education to promote the STEM programmes, decided to build on those initiatives by offering support in the form of sponsorship of STEM leagues in both Three Miles Secondary and Bartica Secondary schools. The OCC hopes that with the launch of the programme, STEM-based solutions can be formulated to transform Bartica into the first ‘green’ town in Guyana and the Caribbean. 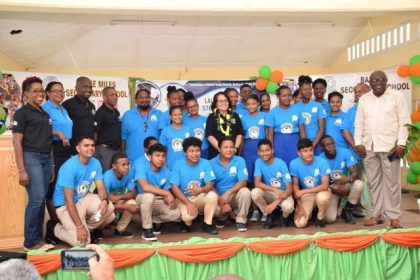 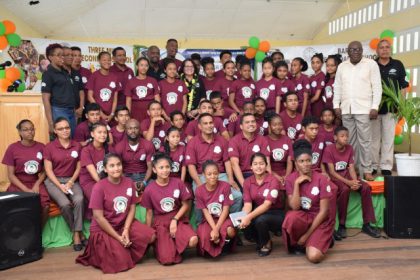 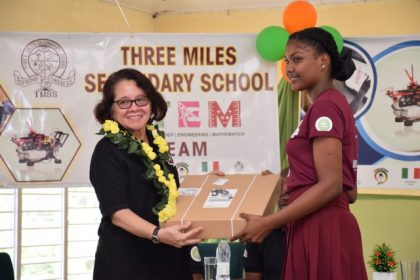 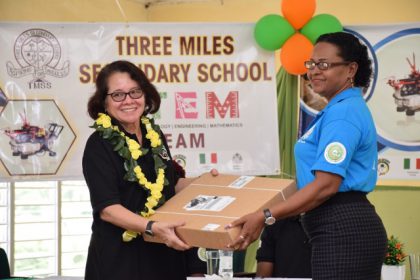 Mrs. Sandra Granger presents a robotics kit to a representative of Bartica Secondary Secondary School today at the launch of the STEM Bartica Pilot Programme.