Streetlights to be installed in Henrietta village

Minister of Public Service, Hon. Tabitha Sarabo-Halley today met with residents of Henrietta and surrounding villages in Region 2. During the community engagement, she pointed out the positive changes which the Coalition government has brought to the lives of residents in the past four years.

Minister of Public Service, Hon. Tabitha Sarabo-Halley during her engagement with residents of Henrietta Village, Pomeroon-Supenaam. 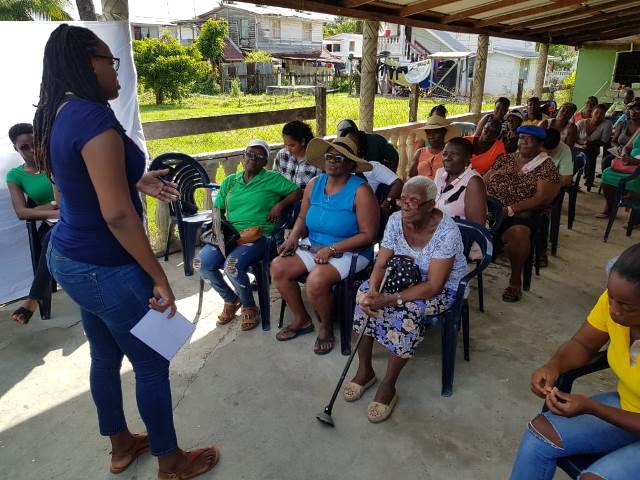 Minister of Public Service, Hon. Tabitha Sarabo-Halley during her engagement with residents of Henrietta Village, Pomeroon-Supenaam.

The increase of the minimum wage, pensions, vast improvements in the education, agriculture and health sectors were highlighted.

Minister Sarabo-Halley disclosed that there are several areas in which the village will benefit in 2020. She reminded that Guyana is opening up, and soon more resources will be available with the production of oil. To this end, the Public Service Minister encouraged the villagers, especially young people to focus on qualifying themselves and improving their skills to benefit.

Residents of Henrietta applauded when the minister announced that the streetlights that were promised are available for installation in various locations within the community.

Among other issues raised was the absence of public convenience for vendors plying their trade at the high bridge in Anna Regina; despite vending fees being collected on daily.

Minister Sarabo-Halley assured that reports on the various issues will be forwarded to the subject ministers to find the best possible solutions soon.