Officials of Neighborhood Democratic Councils (NDC) in Region Three (Essequibo Islands-West Demerara) have been urged to put their political differences aside and address the emerging issues within their constituencies. 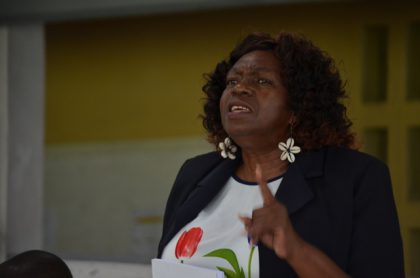 The charge was given last Thursday by the Chairperson of the Demerara-Mahaica Regional Democratic Council (RDC), Genevieve Allen. The chairperson was part of a delegation headed by Minister of Communities, Ronald Bulkan, that met with the local authority officials at the West Demerara Secondary School.

“Take off your political caps,” Allen told the NDC representatives. She said there is no doubt that most of the councils have persons from different political units, however, those elected officials, are placed in office as councillors.

“We are elected as councillors and representatives of the people,” she said, adding that the change in the laws allowing for constituency representation at the level of the NDC, was one of the better decisions of the government.

Allen said officials involved in decision-making, must put their partisan politics aside and take into consideration the holistic development of the communities. By this, she said, the NDC’s can take on board recommendations of either the Village or Community Development Plan.

“I would urge that we take off the political caps and that we put the people’s interest first for the development of the communities.”

She recalled an address by President David Granger in St Cuthbert’s Mission back in 2016, when he suggested that communities design Village Improvement Plans. Allen said, when councils are engaged in these plans, their focus would not be on partisan politics, but on unity and working together in cohesion for the development of the region and communities.

Allen said NDCs can develop their structured long or short-term programme, showing their developmental agenda. Those very plans, she said, can also form part of the Regional Plan of Action.

NDC’s were encouraged to make regular visits to the communities, meet with residents and get a first-hand look at what is needed to be done.

“If you do not make a connection with the people, if you do not make representation on their behalf, you will certainly not be re-elected.  So, if you are not working with your community, you’re going to lose out,” the Region Four Chair said.