Team Smoke triumphed at the 2019 edition of the Ministry of Public Telecommunications’ Hackathon, as the three days of intense Information Technology (IT) challenge concluded Sunday evening, at the Arthur Chung Conference Centre.

This time around, the highly anticipated event saw five teams all creating software – that will allow citizens to easily make reports to the police, other authorities, government ministries and agencies. The App also allows persons to access their report status. 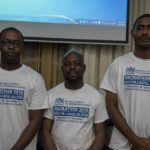 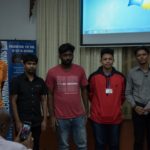 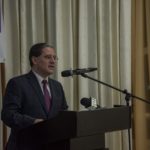 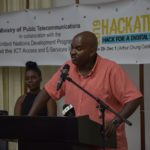 Leader of the victorious Team Smoke, Rayon Hunte, said his group was not that surprised with the 2019 title since it aimed to complete the Hackathon “technically sound”.  Chatting with the Department of Public Information (DPI) minutes after the announcement, Hunte said his team is made up of two of his former colleagues, who collectively enjoy participating in programmes of this nature.

“We are a team of professionals who love to program for fun…. The rules were clear; we were able to work towards that and I think that is the major part of our success…” the IT specialist disclosed.

Coming in second place was Team Logic.  Leader of the five-member group, Julius Simon described the event as a fun experience. “This is my third time participating and I think I enjoyed it more than the others.”

Also listed among the top 3 successful groups is Team Intellect Storm, who was manned by Davendra Narine.

Team Logic and Intellect Storm both received monetary prizes while winning team smoke has been awarded a contract with the United Nations Development Programme.

Ministerial Advisor on ICT Lance Hinds, explained that the participating groups were judged in six areas; the usefulness/practicality of the application; the level of innovation/ originality; UIUX functionality; the ability to present the product; delivery and marker scalability and teamwork.

Hinds said the ministry plans to host a similar activity in the first week of February 2020 and is inviting interested and IT-oriented individuals to participate. He added the ministry aims to take Hackathon to various regions in Guyana.

Jairo Valverde Bermudez, Resident Representative of UNDP Guyana Office, said he is satisfied with the outcome of this year’s event and pledged his organisation’s support in many more innovation challenges in the future. “This [Hackathon] is evidence of the progress we are making in reducing inequality and more specifically gender inequality,” Valverde posited.

“Hack for a digital solution” was the theme of this year’s event facilitated at the Arthur Chung Conference Centre, from November 29 to December 1 2019. It is a collaborative effort between the Ministry, the ICT Access and E-Services Project as well as the United Nations Development Programme.