-Vendors dish up the flavours for Mash 2020

This year’s Mashramani is already being described as the best and biggest to date. Guyanese turned out in the hundreds and the floats are spectacular, living up to the expectation as Guyana observes its Jubilee Republic anniversary.

However, the day would not be complete without popular Guyanese cuisine and lots of beverages. DPI visited the vendors lining the parade route offering a wide array of tasty dishes and thirst quenchers. 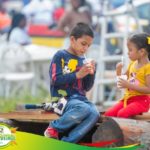 Two little ones cooling down with snow cones 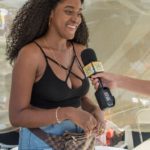 Nickita, owner of Drinks and Chill. 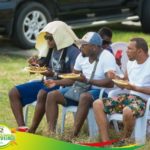 Patrons enjoying a plate of Guyanese fried rice as they look at the floats. 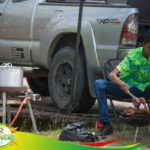 Deep concentration as he grills his chicken.

Nikita, owner of ‘Drinks and Chill’ has all that the patrons might need to cool down after walking in the sun. “We have alcoholic and non-alcoholic beverages and we are inviting you to come out and have a good time,” the young lady said.

According to Nikita, the sales have been good and “we are just looking to see how it progresses during the day and I think it will get better”

Aside from beverages, the air was permeated with mouthwatering smells. One of the persons adding to this ‘aroma-fest’ was ‘D Grill Kings’.

Shoundell Burnet supervisor of ‘D Grill Kings’ said patrons have a choice of barbecue chicken or pork along with fried rice, vegetable rice and cook up rice, something for everyone.

The vendors are dishing up Guyanese flavours to ensure locals and visitors alike have a wide variety to choose from as they take in the sights and sounds of the costume and float parade.