The Attorney General (AG) is adamant that the government does not have to await the conclusion of Carvil Duncan’s criminal matter in the court to move administratively against the public servant. 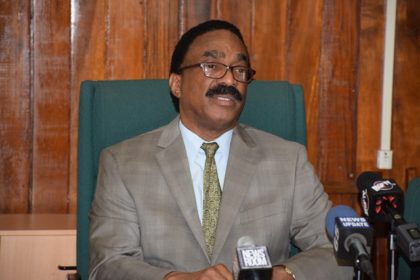 “We don’t have to wait for no criminal matter to be completed to move administratively against anybody that’s always been the rule,” AG Basil Williams told the press today at a press briefing held at the Ministry of Legal Affairs.

Carvil Duncan, who is the head of the Public Service Commission (PSC) and is a member of several other constitutional bodies, is currently facing fraud charges in the Magistrate’s Court. Last month, President David Granger appointed a Tribunal to investigate Duncan’s removal from his post following the charges.

Duncan recently moved to the High Court and was granted an order halting the works of the Tribunal while his matter is before the court. The Attorney General said the Tribunal does not have to await the decision on Duncan’s criminal matter. “If you are a public servant and you are charged for any offence in Guyana what happens to you? You’re interdicted,” AG Williams pointed out.

“Any lawyer worth his salt will know that if you have a criminal offence and you are working with an employer the employer doesn’t have to wait to see whether you are convicted before the employer can decide whether you are good for his employment or not because administratively you could proceed,” the Attorney General explained.

AG Williams said that he will be taking custody of the matter. The Attorney General pointed out that the High Court ruling did not give the Prime Minister an opportunity to       respond to the Order Rule Nisi. “Not because you go for an Order Nisi it inexorably follows that the judge’s hand is tied and they have to plant this order,” the AG said.

It was Prime Minister Moses Nagamootoo who made the recommendations to the President to set up the Tribunal. Duncan is contending that he was not granted the opportunity to be heard before the decision to investigate him was made.  AG Williams pointed out that, “Were the Prime Minister given that opportunity it would have been shown from the record, look evidence of receipt.”

“It means then that if it is shown that they receive the notice that’s the end of the case. The Prime Minister has indicated to me that he will give me instructions and so we will file our answer,” AG Williams said.