– more training sessions on the books

Fifty Guyana Police Force ranks were encouraged, by Minister of Public Security Khemraj Ramjattan, to utilise the training provided by a one-day Noise Management Course, to “understand the various compartments under which certain rules and regulations apply.”

The course, which is being facilitated by the Environmental Protection Agency (EPA), was formally declared opened by Minister Ramjattan.  During remarks, the minister said that the training illustrates the fact that, “a policeman is more than just a policeman”. Minister Ramjattan noted that as society becomes more complicated, the roles of policemen and women will expand depending on the circumstances. Training, he said, is but one step since “we want a revolution” in terms of how they perceive themselves.

The minister expressed that noise pollution can lead to all sorts of social difficulties. He explained that constitutionally, citizens can “Do what you want, but do not hurt or harm others.” 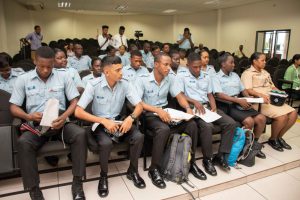 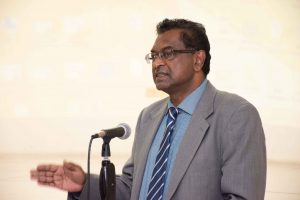 The minister reminded that under the Environmental Protection Act and Noise Management Regulations, persons can be prosecuted. However, he noted that given the ever-evolving nature of society, the time has come to implement more effective prosecutions, such as seizing equipment, revoking licenses, and increasing fines.

“I want policemen to know … about the laws and how they should be enforced,” Minister Ramjattan said, adding that once all officers employ the increased training opportunities offered there will be law and order in the society.

According to the Executive Director of the Environmental Protection Agency, Aminah McPherson-Damon the agency aims to engender a population that is environmentally conscious. McPherson-Damon, who also serves as the organisation’s Legal Corporate Secretary, highlighted that regulations prescribe penalties for those who breach them. McPherson-Damon noted that despite a sound framework, more work remains hence, the need to equip ranks with the legal framework and technical competence to deal with these issues. “It is hoped that today’s workshop is another step to achieving these lofty ideals.”

There were 417 noise nuisance reports in 2017, and more than 300 for 2018. The course is part of the Guyana Police Force’s effort to build capacity to address evolving future challenges.