The A Partnership for National Unity (APNU) party won two of the six constituencies in the Mabaruma Township at the Local Government Elections (LGE) which was held on November 12. 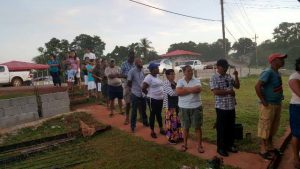 Residents of Constituency Three in the township of Mabaruma waiting to cast their vote during Local Government Elections (LGE) on Monday, Nov. 12.

The PPP won the remaining constituencies (One, Two, Four and Six). They were able to secure four seats with a total of 1,066 votes; and the APNU two seats with 653 votes. The AFC received a total of 96 votes.

On Monday, a total of 1,808 votes were cast in the Mabaruma township and 53 ballots rejected.

This is the second time Mabaruma has participated in Local Government Elections since it was gazetted as a Town.