We are on the right track

─A vote for Coalition is a vote for the future of this country – Min. Ramjattan

With one day remaining for the General and Regional Elections, Prime Ministerial Candidate and Minister of Public Security, Hon Khemraj Ramjattan called on the thousands of Coalition supporters to continue to “the progress”

Minister Ramjattan who was addressing the final Coalition Rally at D’Urban Park, told the massive crowd that the government is “on the right track and the people are saying that we must move together, on this right track.”

He detailed the transformation in education, governance, infrastructure, the economy, the hinterland regions and the restoration of confidence in security and health, that has occurred in the four and a half years.

“We have empowered the people through local government elections. That is a training ground for future leaders and we held it twice in four and a half years,” Minister Ramjattan reminded. 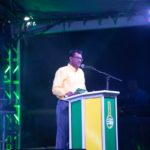 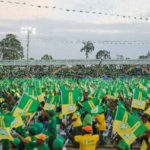 Referencing the oil and gas sector’s profits, he assured that all communities countrywide will benefit from better social services, housing, ICT, salaries and more jobs.

“We must continue the decade of development…we will be the best country to live in the CARICOM region and the Americas!”

Notwithstanding the challenges faced, Minister Ramjattan noted that the Coalition Government kept its promises made to the citizenry.  “We want integrity and decency. You can certainly get it from David Arthur Granger, brothers and sisters”.

Minister Ramjattan thanked those gathered for their support and emphasised that come March 2, “Voting for the ANPU+AFC is voting for your children’s future, the future of the country.”