The village of Kamwatta in the Barima-Waini Region (Region 1) received 10 pumps to aid in the provision of clean drinking water. The pumps were donated by Ben Yantis, who has been conducting missionary work in Guyana and other countries in South America.

The items were handed over to Senior Councillor of Kamwatta Village, Maurice Henry by Ministerial Advisor of the Ministry of Indigenous Peoples’ Affairs and Member of Parliament, Hon. Mervyn Williams, on Friday last.

The pumps are stainless steel and are designed for shallow wells of 30 feet or less in sandy soil. 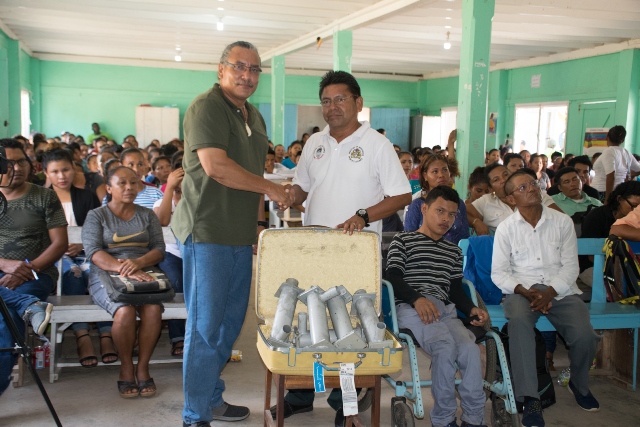 Ministerial Advisor of the Ministry of Indigenous Peoples’ Affairs and Member of Parliament, Hon. Mervyn Williams handing over the water pumps to Senior Councillor of Kamwatta village, Maurice Henry.

During the simple handing over ceremony at the Santa Rosa Secondary School, Williams explained that he had the opportunity to meet Yantis and his missionary team who is partnering with the organisation ‘I Am Clean Energy’ on the initiative.

According to MP Williams, the missionary has decided to collaborate with the Ministry of Indigenous Peoples’ Affairs to ensure access to clean water is extended further and wider. Another 50 pumps have already arrived in Guyana and will be distributed to Hobodeia, Hotoquai and Baramita among other areas.

“The intention is to eventually get 50,000 hand pumps across the hinterland regions where Indigenous peoples live,” Williams announced.

He explained that because the new pumps are made from stainless steel, it is expected to last longer than the previous ones.

Senior Councillor Henry commended Williams for the pumps which will benefit the approximately 600 residents in his village.

The Guyana Water Incorporated (GWI) has commenced the drilling of a well in Kamwatta, where the residents, inclusive of a school and health centre, will benefit from first-time access to potable water.