Guyana has maintained its human development index value of 0.638 for the last two years, ranking 127 out of 188 countries. This was disclosed at the launch of the 2016 United Nations Development Programme’s (UNDP) Human Development Report (HDR), at the University of Guyana, Turkeyen Campus, today.

Guyana’s improved ranking on the UNDP’s HDR should be a clarion reminder to continue working to improve and sustain the developments achieved, Minister of Finance, Winston Jordan said in his feature remarks. 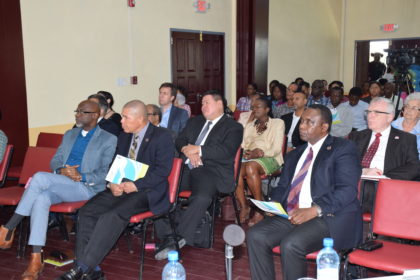 Attendees at the launch of the 2016 Human Development Report

The government has increased allocations to the social sector, particularly health and education. It has also undertaken sweeping tax reforms, increased real wages including raising public sector incomes by 38 per cent, adjusting the income tax threshold by a minimum of 20 percent, and increasing the old age pension and social assistance.

“We are passionate in our resolve to bridge the development divide between the coast and the hinterland,” Minister Jordan said while highlighting the infrastructural works that will be undertaken to get this done.

Deputy Resident Representative of the UNDP, Shabnam Mallick, noted that Guyana has made “good progress in many aspects” 50 years after its independence. However,  the country remains plagued by “chronic difficulties” in the areas of transforming its natural wealth into human development, accelerating development efforts in hinterland areas and pursuing social inclusion and cohesion measures.

Guyana has made progress since 1990, improving by some 17.9 percentage points consequent upon improvements in life expectancy, mean uses or schooling, expected years of schooling and improved gross national income.

However, Minister Jordan cautioned that while Guyana is trending in the right direction, “We must work harder and smarter to conquer the scourge of poverty.”

There must be collective effort towards achieving national and Sustainable Development Goals (SDGs), the Minister added. The government and relevant stakeholders must step up the quality and frequency of engagements, both nationally and globally. 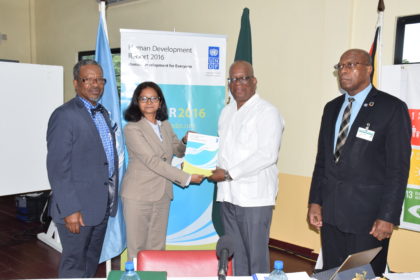 “Only sustainable interventions will remove individuals and by design, communities and nations from poverty,” Minister Jordan pointed out.

There is a need for consistency in defining how development is measured in individual countries, the Minister contended. “Defining a country’s development level must not be solely driven by a one dimensional formula,” the Minister said.

Minister Jordan was referencing the formula that uses total money earned by a country divided by total number of persons in a country. The Minister noted that it has long been recognised that this restrictive measure of a country’s development is not a multidimensional indicator.

Guyana has since been ranked as a middle income country. This means that Guyana is now ineligible for development partner support in certain areas and is denied access to concessional resources because of per capita increase.

Minister Jordan is opposed to these decisions. “We will continue the struggle with like-minded partners to fashion a more appropriate, all-embracing, universally accepted measure.”

The HDR is a flagship report of the UNDP. This is the 25th  HDR report and is entitled “Human Development for Everyone”. The 2016 HDR focuses on how human development can be ensured for everyone now and in the future.

The HDR report finds that although average human development improved significantly across all regions from 1990 to 2015, one in three persons continue to live in low levels of human development as measured by the Human Development Index (HDI).

Mallick said there are hopeful notes in the report. The report declares that human development for everyone is attainable, and there is hope that transformation in human development is possible since the world has the resources and knowledge to do that.