A new sluice at Bagotsville, West Bank Demerara was commissioned today, by Minister of Agriculture, Noel Holder. The sluice was designed to drain an area of 1,060 acres and benefit approximately 2,500 residents and farmers. It was constructed at a cost of approximately $83M of which almost $18M was for consultancy services provided by SRK N’gineering and Associates. 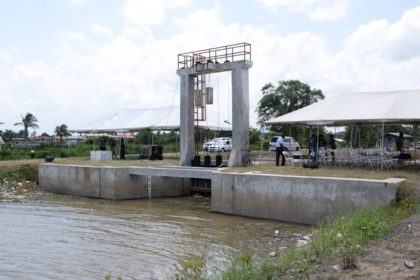 In brief remarks at the commissioning ceremony, Holder said the sluice will bring much needed relief to residents of Bagotsville and nearby community as it should reduce instances of flooding.

“This investment will allow farmers to increase their acreage and yield and reduce the losses they would have experienced in times of flooding. With the commissioning of the sluice, farmers can be assured that the fear of flooding would now be minimal,” Minister Holder said.

Holder said the construction and commissioning of the sluice comes at a time when the Ministry of Agriculture, through the National Drainage and Irrigation Authority (NDIA), is focusing on water management since almost all of Guyana’s agriculture is practiced on the flood prone, low lying coastal regions.

“The theme for 2016 reflects on building a resilient agriculture as a means of adapting to the effects of climate change. This sluice at Bagotsville is very timely and necessary since, for approximately 25 years, your old sluice was abandoned.  This resulted in your experiencing numerous periods of prolonged inundation due to intensive rainfall,” Holder noted.

He encouraged that climate change be taken seriously and lifestyles adapted to mitigate the effects of flooding and other resultant conditions.

The minister assured residents that the government remains commitment to improving their livelihoods through e necessary infrastructural works that would aid their return to farming and other economic activities previously affected by flooding.

“Ladies and Gentlemen, rest assured that we are actively working to provide the necessary investments in infrastructure to raise your quality of life through proper drainage and irrigation. While there is much more to be done, I can assure you that my government is resolute in building more relief channels, more sluices to release water into the ocean and rivers, installing more pumps to complement the sluices and increasing the holding capacity of water conservancies,” Holder said, adding that the government plans to expand the present irrigation system through greater connectivity to water sources, more capacity for irrigation canals and improve the irrigation pump capacities.

Regional Chairman of the Region Three, Julius Faeber, encouraged the NDC to take good care of the new sluice, which Dr. Krishna Narine of the consultant agency, said can last for about 75 years.

Faeber further called on the NDIA and the Ministry of Agriculture to do all that is possible to ensure other defunct sluices in the Region are rehabilitated and opertionalised.

Meanwhile, Chairman of the Neighbourhood Democratic Council, Isaac Bhagwandin, recalled making an approach to the then government in 2005, following a major flood which affected Bagotsville, Nismes and nearby communities, to have the sluice constructed. This was to no 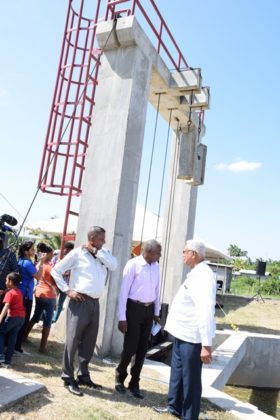 Bhagwandin encouraged the residents to return to the productive use of the farmlands since the government of the day has made it possible for the lack of drainage to be addressed.

Farmer, Leroy Evans, said he remembers when he was age seven; the main economic activity in Bagotsville was farming. He said farmers abandoned the land as flooding became worse. He pleaded with Minister Holder and representatives of the NDIA to assist in clearing the lands of vegetation so that residents of the community can return to farming as a major economic activity in the West Bank Demerara community.

The newly constructed sluice replaces an arrangement which saw water from the Bagotsville community being channeled to the Nismes drainage system, which proved inadequate to drain both areas.

Chief Engineer of the NDIA, Dave Hicks had previously explained that when it rained, most of the water was channeled to the Canal Polder area, “but it couldn’t take off the capacity. During the rainy (season) they’ll be flooding in the farmlands and some residential areas and there were a lot of calls to install pumps,” Hicks had said.

The NDIA realized that it would be more cost effective to install a sluice in the area where there was a good flow and less siltation to the Demerara River. This was a better option when compared to installing a pump.

The senior engineer noted that the construction of the sluice was completed three months ago through a collaborative effort between the NDIA, the Regional Democratic Council (RDC) and lregional representative.