911 emergency system up and running

The long-awaited 911 emergency calling system, which was down for a lengthy period of time, is finally up and running again. The commissioning ceremony was held in the Brickdam Police Station’s compound. 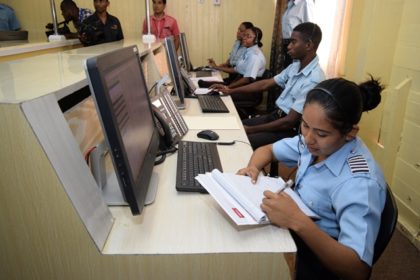 Minister of Public Security Khemraj Ramjattan delivering the feature address described the recommissioning as a huge development for the security of the nation. He said that the system is expected to flow smoothly in terms of response time as a corps of police ranks have been trained to carry out the functions.

He also disclosed that the Guyana Police Force is set to receive a fleet of vehicles worth billions of Guyana dollars from the Chinese Government. The Minister said that “(It’s) fine we have a nice 911 so we call up and when we call up the police station and they reroute back the call to Crabwood creek or to Skeldon police station, they have cars or jeeps that will respond to the call.”

The Minister highlighted that the vehicles include over 56 pickups, 20 buses and 25 All- Terrain Vehicles (ATVs) among a number of other vehicles and equipment. The commissioning of the vehicles is slated for Monday, November 6, 2017, by President David Granger. 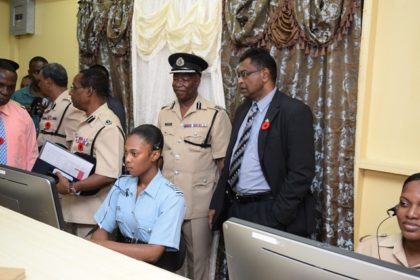 Minister of Public Security Khemraj Ramjattan taking a tour of the 911 operational centre at the Brickdam Police station.

The call system is outfitted with a number of special features including selective call transfers and automatic caller identification and the option to send a text message in case of the inability to make a call, scalable call handling. Other features include customizer reporting which can expand to cooperate graphical geographic information system (GIS) and integration with the closed-circuit television cameras (CCTV).

Additionally, (ag) Commissioner of Police David Ramnarine highlighted that 52 such facilities will soon be disseminated to locations across the country. The corps of officers charged with operating the system have all received customer related training prior to the launch of the system. Commissioner Ramnarine reminded them of the importance of professionalism in the execution of their duties.

“Our attitudinal behaviour towards our work, towards colleagues, towards the members of the public, there is a huge gap and so I can only urge those of you who will be engaged in ensuring that the 911 emergency system… will be something meaningful, something useful, not something mirroring the challenges of the past, it must never be so”, the acting Commissioner explained.

Ramnarine noted that the establishment of the 911 system constitutes part of the Guyana Police Force’s reform.

Representatives of service providers GTT and Digicel, who made the system a reality expressed satisfaction at being able to play their role in ensuring the safety of citizens of the country. 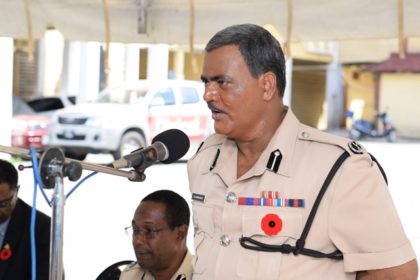 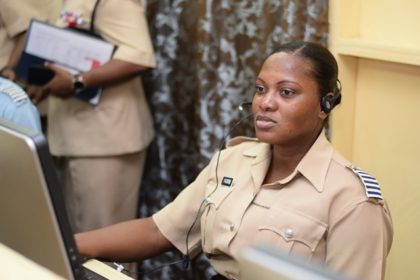