Accident at LBI bond could have been avoided – Labour Dept

Chief Labour Officer, Charles Ogle, on behalf of the Ministry of Social Protection today, handed over the official report on the death of construction worker Asraf Hoosaney.

The report stated that fatal accident could have been avoided if the provisions of the Occupational Safety and Health (OS&HA) Act were observed by those who were in charge of the operations at Tony’s Auto Spare’s Bond. 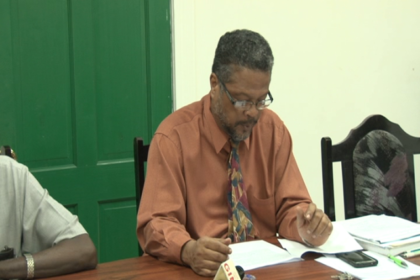 Chief Labour Officer, Charles Ogle, presenting the report on behalf of the Ministry of Social Protection of the death of contractor Asraf Hoosaney

The report further stated that one of the electrical lights was approximately five feet away from the workshop and the power line which the victim came in contact with carried 240 volts which was confirmed by Guyana Power and Light.

The report noted that the Ministry of Social Protection has no intention of compromising the discharge of its mandate to promote a culture of safety in all places of work and continues to educate and sensitise employers and employees on the rudiments and parameters of safety practices in the OS&H Act, at work and even while at home.

Ogle stated that companies and employers are being encouraged to set and maintain the highest possible standards within the realm of safety. “The notion that accidents are inevitable has no place in the thought process and value system of the Ministry,” Ogle said.

The Chief Labour Officer explained that while the Ministry of Social Protection usually joins the rest of the world to observe “World Day for Safety and Health at Work,” the thought is that every day should be safety and health day.

Ogle pointed out that among the many new safety and health initiatives being pursued by the Ministry is the establishment of a hotline for the prompt reporting of workplace accidents.

Further, all workplaces will be investigated and the findings will be shared with the employers so that the lessons learnt can form the basis for pre-emptive training in the future.

Ogle said the report is being shared with interested parties including the National Insurance Scheme, Guyana Power and Light and the Commissioner of Police.

Meanwhile, the ministry wishes to repeat its encouragement to members of the public to use the hotline facility and report all safety breaches and potential breaches.  The public can report safety breaches including work place accidents on telephone number 225-008.