Senior Superintendent and Officer in Charge of the Mazaruni Prison, Alexander Hopkinson is thankful for the support received since the intake of 83 additional prisoners at the facility. The transfer of the 83 inmates followed the fire which reduced the Camp Street Prison to rubble, leaving over 1000 inmates displaced.

Senior Superintendent Hopkinson said that he is currently receiving tremendous support from his staff despite them being a young batch. He also noted that prison officers are handling the situation in a professional manner. “The mindset is they are ready for any encounter, they know what is to be done because they already trained in the area…, whether internal or external,” Hopkinson explained.

Hopkinson also pointed out that support is also coming from the Regional Democratic Council(RDC), the Mayor’s office, among others. “We are having great support the Bartica police Mr. Budhram, the army, so we are having a lot of support, also as much as the regional chairman, the mayor, I am also having support from them,” Hopkinson stated.

The Officer in Charge confirmed that despite the additional 83 prisoners, there is adequate ration and space for all the inmates.

Following the fire which gutted the Camp Street Prisons the government has been forced to transfer prisoners to the various prison facilities, countrywide. 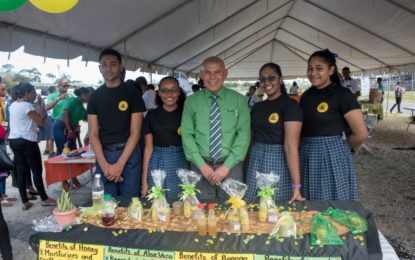 Address to the Nation by President David Granger...

Education Minister donates beds to the family of...