All prepped for Nominations Day 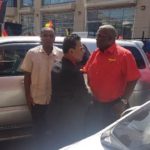 “I feel very prepared,” said Philips in an invited comment after arriving at Freedom House at 11am.

Philips declined to elaborate further after being pressed on details surrounding the readiness of the party to contest the upcoming General and Regional Elections.

Leader of the PPP/C ticket Irfaan Ali arrived at Freedom House after Phillips. Parties interested in contesting the elections will submit their lists to the Guyana Elections Commission at the Umana Yana from 1pm until 5pm.