(Georgetown, June 8, 2017) – The term Guyanese Girl rocks can be aptly ascribed to Alysa Teresa Xavier a star Goalkeeper whose eyes are on the prize academically as well as on the Hockey field.

Age 24, this former Queen College girl who graduated with ten subjects at the CSEC level may appear like the ordinary modest girl but she is the kind of woman a country a father can be proud of literally. 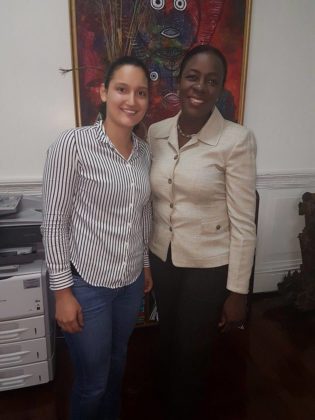 “This kind of inspiration is needed among our youth and I commend this young woman for her outstanding exploits that projects the positive light on herself, the sport and the country.” Such were the commendations spoken Xavier a US based Field Hockey Goal Keeper who is holding her own as a recent graduate of the Miami University, Ohio during a meeting on Thursday.

Her love is for hockey but she was also an ace cricketer who probably has the record for hitting the most sixes out of the Eve Leary ground in her Guyana school days.

Understandably so she hails from a family of sportsmen and women where Anthony Xavier, the current administrator is a former National Volleyball player and several of her siblings also have a love for hockey.

Originally from Subryanville, Georgetown Xavier is one of eleven siblings and started playing hockey at age eleven (11) but started goalkeeping at age thirteen (13).

“Alysa showed great promise from an early age exceeding the expectations of others and rose through the ranks quickly to make the Guyana National Hockey team,” said Phillip Fernandes her forever coach who is the President of the Guyana Hockey Board.

Reflecting he said she was the youngest player at age 14 to have made the National team to date and for several years she was a mainstay as the number one goalkeeper for the Guyana National team for sojourns in and out of Guyana.

In 2013 she was selected to be on the PANAMERICAN All-Stars team, a first for Guyana and she remains the lone Guyanese to have been selected to that status.

Through links established by the Guyana Hockey Board, she was offered a Hockey scholarship to the Miami University, Ohio in 2013. Since then there has been no looking back for this young woman.  Academics wise Xavier excelled in Kinesiology maintaining an above 3.0 grade average over the four years period before graduating in May with a Bachelor’s of Science degree.

On the field, she was no less brilliant and her efforts along with other teammates ensured that the University’s Team won the Mid-American

Ultimately Xavier aspires to be the best goalkeeper in the world while being a Clinical Exercise Physiologist.

Her strides in the sport have been many as have been her exploits and her forever coach who is the President of the Guyana Hockey Board says  what she has done is a first for Guyana and the board is aspiring to secure similar opportunities for other prospective hockey players who are as determined and as committed as Xavier is. “She has made us proud,” Fernandes said.

When not playing hockey Xavier is a work horse who believes in action and walking the talk.

Though not where she wants to be eventually, she believes that “anything is possible if you work hard for it” and noted too that while life may not be always smooth sailing giving up should not be an option. “For the first two years on campus, it was tough coping but then it came easy afterwards …operating outside your comfort zone always leads to greatness and that makes the difference between winners and quitters.” She can be found on Facebook by simply looking for her name.

Some of Alysa’s accolades includes:-

– Scholar-Athlete Citation for maintaining at least a 3.0 scholastic average while participating in Field Hockey (2016).

– English 111 project “just writing- nothing more nothing less” was selected and published in the textbook College Composition at Miami University.