Special Assistant on Legal Issues to the Minister of Indigenous Peoples’ Affairs, David James told the Parliamentary Sectoral Committee on Natural Resources today, at Parliament building that the ministry has already accessed a legal expert for advice on moving forward with the proposed adjustments.

Consultations on the review of the Act began in June after the National Toshaos Council (NTC), villages and other interest groups raised their concern with the Minister of Indigenous Peoples’ Affairs Sydney Allicock. 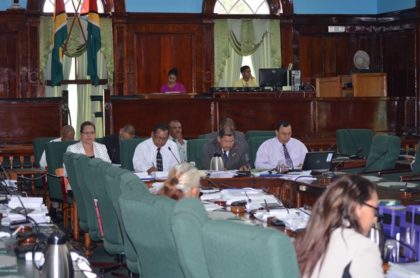 Minister of Indigenous Peoples’ Affairs, Sydney Allicock (centre) and his team before the Parliamentary Sectoral Committee on Natural Resources

Committee member and PPP/C Member of Parliament Pauline Sukhai questioned Minister Allicock about the “specific clauses or issues that the clamour for review is going to engage.”

There has been a concerted call by residents of Amerindian villages for the amendment of the Act in relation to mining, James explained.

“Provisions relating to mining such as Section 50 which deals with large scale mining should also be reviewed, revised and reformed to ensure that the full consent of the indigenous people is obtained before large scale mining can proceed,” James said.

In June, Minister Allicock told the Government Information Agency (GINA) that the revision will also focus on Free, Prior and Informed Consent (FPIC) and many of the land issues.

The Amerindian Act of 2006 was intended to protect the fundamental rights and freedoms  of the Indigenous peoples, including the right to life, liberty, expression, movement and the protection from slavery and forced labour, culture and tradition.