An indigenous centered approach to development –The Belizean Mayan experience

Indigenous leaders on the last day of the National Toshaos Council Conference learnt from their Belizean counterparts how they secured their well-being and the possibility for large scale cassava production.

Today at the Cyril Potter College of Education (CPCE), Turkeyen, Georgetown the NTC Council wrapped up its week-long session with the first ever Indigeneity Conference. The aim was to enable dialogue on the development and governance of indigenous people of CARICOM and South American countries.

Programme Coordinator of Maya Leaders Alliance, Pablo Mis shared with Toshaos how the Mayans from Belize confronted the challenges to their welfare as first peoples by using global tools “to bring visibility to re-inspire ourselves, to build the confidence in ourselves to take on these challenges”.

Mis explained that the Mayans, who are spread across Central America, have utilised the Belizean constitution and other agencies “to bring visibility to our cause”. These mechanisms, he noted, can be useful to the Guyanese indigenous people as well.

Mis also told the indigenous leaders they must recognise that they have rights and responsibilities. “If we understand that we’ve always had that we must then be able to understand then as leaders that our rights and responsibilities continue to evolve, to change, they are new things coming into our way of life and for that we need to have a good mechanism in place,” he explained.

However, Mis reminded the indigenous leaders they must examine where and why they are failing and the measures they need to implement to ensure that indigenous peoples’ well-being is secured.

Minister of Indigenous Peoples’ Affairs, Sydney Allicock said the Belize perspective provides a clearer understanding on traditional management. “I am very pleased that we could have this exchange because Guyana needs to partner with Belize because…they, the Mayan people, they have a governance system that is I could say equal to none in terms of the indigenous people in South America,” Minister Allicock noted.

Toshaos also learnt the methods to increase cassava production to help sustain their communities and tap into international markets by Mark Chatarpal. His presentation examined how cassava as an alternative form of development can promote the welfare of the indigenous peoples. “There is a huge opportunity from China who is buying massive amounts of cassava to produce what is known globally as tapioca flour or tapioca balls. In addition, tapioca flour which is basically cassava flour is garnering a significant market share primarily in the US and European markets,” Chatarpaul explained.

Chatarpal is perusing his Ph.D. in food studies at the Indiana University’s Department of Anthropology. As a researcher the University’s Food Studies Institute, Chatarpal’s focus is on cassava production in the wider region. 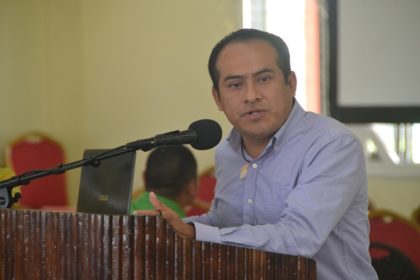