Several counting agents of the national recount of the March 2 polls currently underway at the Arthur Chung Conference Centre (ACCC) have reported anomalies in ballots boxes at their respective workstations during the morning session.

Though the process got off to a late start, workstations were able to complete at least one ballot box from the regions under review.

Minister within the Ministry of the Presidency with responsibility for Youth Affairs, Simona Broomes told media operatives at her lunch break that anomalies were detected in the Region Two ballots being counted at workstation four. She said she did register those findings following the protocols.

“To the end of it, it will go through the channels it has to go through. Because it is still ongoing in there, I would not want to say what it is, because all this information I like to be very factual. So yes, I have observed them and brought them to the attention of the officer there,”.

Apart from that, Broomes said things have generally been moving smoothly.

“Counting votes for me is a timely process. In the best interest of all, we are looking for credible results and I think we should all work with GECOM staff. They are doing the best at my station. The process was moving, I have no complaints at this time,” she noted 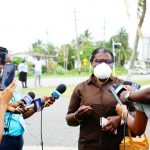 Ministerwithin the Ministry of the Presidency with responsibility for Youth Affairs,Simona Broomes speaking with the media (source: Guyana Chronicle) 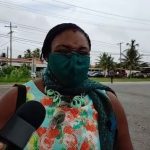 CorettaMcDonald, a representative of the APNU+AFC situated at workstation seven where ballotsfrom Region 3 are being counted

Another party agent Coretta McDonald spoke of the precautionary measures being taken to prevent the spread of COVID-19 at workstation seven, counting ballots from Region Three. While a bit concerned about the number of persons in her stations, McDonald, however, noted that “things went fine.”

One issue it was explained concerned the fact that instead of the X being written in the box, it was instead placed on the name of the party. The other was regarding a stroke instead of an X. Both of those issues were queried and deemed valid.

“Other than that, the process at station seven went very smoothly. Persons accepted the count as they were. So far so good and I am looking forward to what is going to be happening this afternoon and the rest of the week.”

Carol Joseph who represented the APNU+AFC said despite the late start, her workstation number nine was able to complete the counting of a Region Four box, where 240 persons were registered to vote.

“We have proof. We are not only saying these things. Every objection that we have made there when called upon we proved it” she said, “people don’t want to handle the truth.”

“I don’t see it as wasting time, if you’re doing something, you have to do it properly and I think this will set the basis of future elections we must do it,” Joseph underscored.

Another Coalition representative, Ganesh Manhipaul who is attached to station five where ballots from Region Three are also being counted, noted that the first ballot box examined by the agents found some anomalies, including a vote for the APNU+AFC in the mix with those of the PPP.

There were also rejected votes within the PPP set – one ballot was marked for two parties and the other was visibly torn Mahipaul explained.

“So clearly there were issues in these ballot boxes and regardless of the discrepancies, you must take note of it,” he said, during his break.

Mahipaul also expressed disappointment of being unable to access the poll book for that one polling place. It was following objections that the book was made available. “But I am telling you that there are problems in these ballot boxes, there are discrepancies,” he noted.