Students of St. Cuthbert’s Mission Secondary School will soon benefit from the introduction of arts and sports which are expected to aid in promoting well rounded students.

Renowned Guyanese artist George Simon is working with the Ministry of Indigenous Peoples’ Affairs to introduce art at the school. St Cuthbert’s is the only Indigenous community in Region Four.

This was disclosed by Minister within the Minister of Indigenous Peoples’ Affairs, Valerie Garrido-Lowe in an interview with the Government Information Agency (GINA). 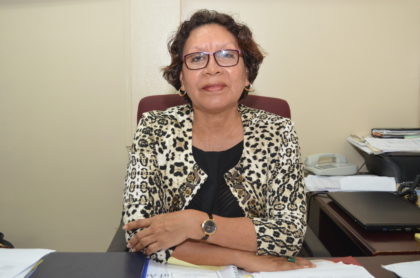 Minister Garrido-Lowe said that many times the students complain of school being boring. They are of the view that school activities on the coast are more exciting. “We want to encourage painting, art in the school to have an exhibition during that time too so we really want them to think that their school is special, that we are paying an interest in them,” the Minister explained.

The Minister said that to give art a boost, there will be the establishment of a centre where artists in St. Cuthbert can go and practice. “I am looking at building like a benab … where everybody who wants to paint or carve can go to this benab,” Minister Lowe stated.

While the benab will afford youths the chance to practice and develop their skills, it can also serve as a tourist attraction for those who want to witness an artist practicing his or her craft.

Additionally, there will be the introduction of a schools’ football tournament. The competition is scheduled to commence in November, 2016 with the aim of having the game held annually. The school has already received from the Ministry of Indigenous Peoples’ Affairs sports gear to help with the preparati0n of the tournament.

“I think it’s a grand idea,” Minister Lowe stated, adding that, “I am into sports and now the patron for women’s football in Guyana, I am happy to promote football on a whole.”

The introduction of art and sports in schools is part of the government’s educational reform plan to have well rounded individuals.