His Excellency President David Granger is urging all Guyanese to await the completion of the four stages of the national recount process before jumping to conclusions.

In an address to the nation, the Head of State outlined those four stages as – the recount of the ballots cast on Elections day; the report of the recount; the review of the report and the declarations of results of the process. 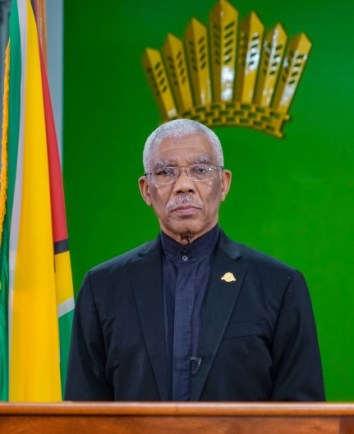 The President called on Guyanese to respect the decision of the Elections Commission and to desist from scurrility, vulgarity and character assassination.

“I encourage everyone to await the completion of the four stages – the current recount, the reports of the Chief Elections Officer and the CARICOM observers, the review by the Elections Commission and the declarations of the final results by the Chairman of the Commission.”

He noted that the recount stage will come to an end soon which will pave way for the compilation of a report by the Chief Elections Officer (CEO).

The Head of State again reminded of the many reports of irregularities including unstamped ballots, deceased and migrant voters and missing poll books. Those irregularities, the Head of State emphasised: “appear to have been committed intentionally, not accidentally and demonstrate a pattern of manipulation of the electoral process.”

The compiled report will be submitted to the Elections Commission for a review by the Commissioners.

Thereafter, a declaration of the results will be made after the Chairman of the Elections Commission (retd) Justice Claudette Singh has studied the report from the CEO and the Observation Reports.

President Granger reiterated his pledge to accept the declarations of the results by the Elections Commission.

The Head of State also commended the “diligence and persistence” of the Chairperson who he said continues to admirably perform her duties under the constitution.