The Minister of Legal Affair and Attorney General (AG), Basil Williams SC has responded to an article published in a local newspaper in which he says the Bar Council has attacked the Guyana Elections Commissions (GECOM).

In the article published on Friday, April 17, 2020, the Bar Council called for GECOM to expedite the process (current recount of ballots from the March 2nd 2020 elections), saying that there was a need for accurate and transparent poll results, and that failure for GECOM to ensure this after six weeks was disgraceful and inexcusable. 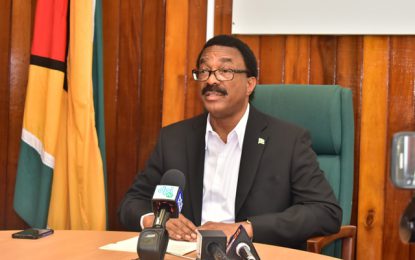 AG Council Williams described the attack as being filled with half-truths, and that the Bar Council should be ashamed to pronounce that Guyana would fall into a Constitutional abyss if GECOM’s effort, under article 162 (1)(b) of the Constitution, to deliver an impartial and free election in compliance with the laws of Guyana, goes beyond April 30, 2020.

He shared that the Bar Council had a duty to fully disclose that though Article 69 of the Constitution provides that on dissolution the next session of Parliament must be convened no later than four months from the end of the preceding session, the Court of Appeal of Guyana in 2006 upheld the decision of the Chief Justice Carl Singh, that the four months’ timeline was directory and “not mandatory”.

“This case Civil Appeal No.79 of 2006 was appealed by the Leadership of the AFC, challenging the PPPC’s convening the new Parliament, not on the 2nd day of September 2006 (four months after dissolution) but on the 28th of September, 2006, almost five months later.” AG Williams explained, stating that the Bar Council did not make any alarm about a constitutional abyss then.

He added that at that time, there was no pandemic or required social distancing as is presently the case in Guyana due to COVID-19.

“In the 2006 elections, there was no pandemic that required social distancing, nor Court challenge before the declaration of the results of the elections as at present.” AG Williams noted.

Adding also that evidence showed a deliberate intention on the part of the opposition PPP to ignore the four months’ timeline in Article 69 in previous years.

“Jagdeo had thrown the kitchen sink at Article 69 at the 2006 elections; He was sworn in on the 2nd day of September 2006, the date on which Parliament should have been convened. He appointed Ministers before their names were extracted by the Representative of the PPPC’s list, and before the first session of Parliament commenced.” Williams stated.

The Attorney General challenged the Bar Council about this, and expressed confidence that GECOM lawyers would respond to the attack and abuse directed towards it, by the Bar Council.

AG Williams urged GECOM not to be distracted from its constitutional mandate envisaged in Articles 62 and 162 of the Constitution to independently supervise and conduct elections in Guyana, in order to deliver credible elections.